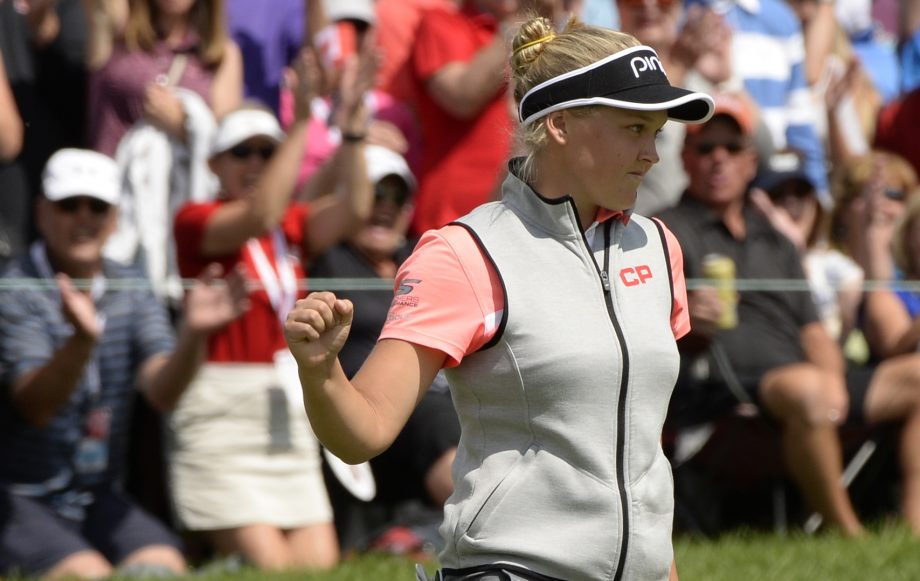 OTTAWA – Brooke Henderson said that it would take a miracle for her to get into contention at the CP Women’s Open after barely making the cut. She got that miracle on Saturday.

Henderson fired a course record 8-under 63 at the Ottawa Hunt and Golf Club to rocket up the leaderboard into a temporary tie for second at 7-under par before several players passed her. Still, finishing the day tied for sixth, three shots behind co-leaders Mo Martin and Nicole Broch Larsen, was a big improvement after needing a birdie on her final hole Friday to even play in the third round.

“Having the cut out of the way kind of gave me a little bit of a scare yesterday, being so close and almost not even playing the weekend,” said Henderson. “So I knew I had to get going.”

She added with a laugh: “Today is moving day, so I moved, that’s for sure.”

Brittany Marchand of Orangeville, Ont., was the only other Canadian left in the field after Friday night’s cuts. She shot a 1-over 72 to finish the day at 1-under par tied for 45th.

“It does a lot for my confidence no matter how the weekend goes,” said Marchand, who was a sponsor exemption that usually plays on the Symetra Tour. “Maybe today a few mistakes here and there. But overall I’m happy I’m playing the weekend. To know that I can play out here gives me confidence when I go back to Symetra.”

Henderson, who is from nearby Smiths Falls, Ont., and an honorary member at the Ottawa Hunt and Golf Club, doesn’t normally keep score when she’s playing the course for fun. The history books are telling though: the previous course record was a 64 set by Yani Tseng in 2008 before the course was redesigned in 2013. The men’s record was a 65 set by golfing legend Jack Nicklaus in 1960 as an amateur at the America’s Cup.

Her approach shot shanked a little, falling on the green 70 feet from the hole. A long putt settled about 20 feet away from the pin, making par seem unlikely. But Henderson steadied herself and drained the shot, her knees buckling slightly from relief as the hundreds of fans trailing her from hole to hole burst into applause.

“I was really disappointed with that second shot. I kind of mentally got in my way there, and then that two-putt, when I went up to it, I was hoping for a two-putt and I was able to get it,” said Henderson. “Just kind of fell in the side door there, and then it led to two more birdies on 17 and 18.

Marchand was also frustrated on No. 16, bogeying before recovering on the next hole with a birdie.

“I three-putted on 16, and that was just frustration because I was mad that I missed my birdie putt again. Then I go and three-putt from ten feet. Just little things like that, I think those are the frustration parts a few times. But then I’m glad I bounced back with a birdie and little things.

The crowds following Henderson around the course have been the talk of the tournament. Although the 19-year-old Henderson admitted on Friday that she felt a lot of pressure as the star of the show, she was more relaxed and happy on Saturday and enjoying the support of the fans.

“Coming up 18 I kind of just took a peek around and I didn’t see any green grass outside of the ropes,” said Henderson. “Everybody was everywhere. So it’s such an incredible feeling. Being so close to home makes this week so much more special.”

.@BrookeHenderson puts on a show today as she shoots a course record of 63 during her 3rd round! Watch highlights:#CPWO pic.twitter.com/DQUeY9vGIe