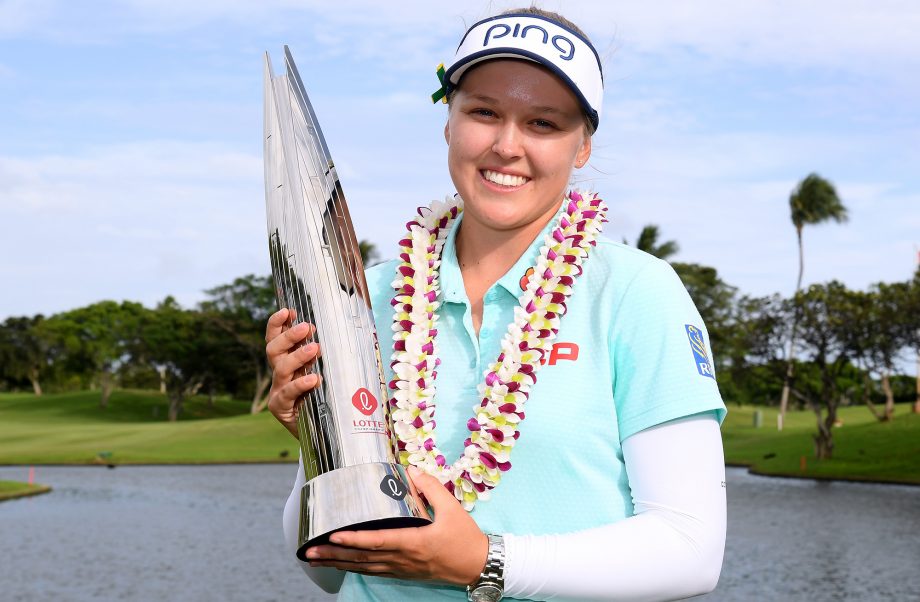 KAPOLEI, HI - APRIL 14: Brooke Henderson of Canada poses with the trophy after a four shot victory in the LPGA LOTTE Championship at the Ko Olina Golf Club on April 14, 2018 in Kapolei, Hawaii. (Photo by Harry How/Getty Images)

She wasn’t about to let it happen Saturday at windy Ko Olina Golf Club, where she won by four shots. The Smiths Falls, Ont., native was too talented, and she had some very important people to play for, dedicating her victory to the people involved in the Humboldt Broncos junior hockey team bus crash in Saskatchewan.

“It’s extremely sad, a terrible tragedy what happened up there,” Henderson said. “I know it kind of affected my whole country. Everybody really took it kind of personally.

“For all the survivors that are still fighting through it and all the ones that have passed away, I want to show them that we’re here for them and we’re supporting them. They’re always going to be in our thoughts and prayers.”

Canadian golfers and their caddies were wearing green and gold ribbons at the tournament this week to honour the victims of the April 6 crash. Twenty-nine people were on the team bus when it collided with a semi-truck en route to a playoff game in Nipawin, Sask. Sixteen of them have died and 13 were injured.

A champion in every way ??

Hamilton’s Alena Sharp, who finished in a tie for 44th place at 4 over, had posted a picture on Twitter of one of the ribbons pinned to the side of her hat on Tuesday.

Henderson, who won’t be 21 until September, won her sixth LPGA Tour title, leaving her just two short of Sandra Post for most wins by a Canadian player.

It was Munoz’s best finish in more than four years. Henderson and sixth-ranked Ariya Jutanugarn (69) were the only other golfers to break 70 on a day that featured rain squalls and winds gusting to 30 mph.

“Crazy windy again” said Henderson, who was third in greens in regulation (52 of 72) and sixth in driving distance (288.8) for the week. “Just being able to adjust to it, kind of stay poised in it. Things aren’t going to always go perfectly, but I felt like my ball striking was probably the best it’s ever been.”

Jutanugarn tied for third, five back, with top-ranked Shanshan Feng (71) and third-ranked Inbee Park (72), who bogeyed the last two holes.

Henderson came into the week ranked 14th and in a comfort zone. She has never finished worse than 11th at Ko Olina.

At the halfway point, she was 10 under, bogey-free and two shots ahead. That stretched to five at the turn Friday, before putting problems brought the field back into it.

Henderson led by just one heading into the final day. She played the first 11 holes Saturday in 2 under to carve out a three-shot advantage, then faltered again. Her only bogey came on the 12th and she missed a short birdie putt at the next hole.

This time she recovered quickly, hitting driver-driver within 20 yards of the 14th green, then sinking a short birdie putt. She drained a 10-footer for another birdie one the 16th, where she four-putted Friday.

“Mentally I was in a great spot this week,” Henderson said. “I missed a couple putts, which you could argue that mentally I wasn’t there because of a couple mishits, but I think to recover from that and kind of put it in the past and then go out and make some more birdies. And, being the leader since early Thursday, that does add a little of pressure.”

Munoz and Jutanugarn put together the only serious charges of the final round. Both came up a few holes short.

Munoz, who has struggled with illness injury the past few years, climbed 13 places the final day. She was two shots back after her fifth birdie of the day, at the 14th, but parred in.

Jutanugarn, from Thailand, secured her fifth Top 10 this year but couldn’t get the eighth victory of her career. At the turn, the 2016 Player of the Year was 3 under and three back. She parred her final 11 holes.

Alena Sharp of Hamilton, Ont., finished at 4 over par in a tie for 44th. Fellow Canadians Brittany Marchand (Orangeville, Ont.) and Maude-Aimée LeBlanc (Sherbrooke, Que.) closed with shares of 50th.