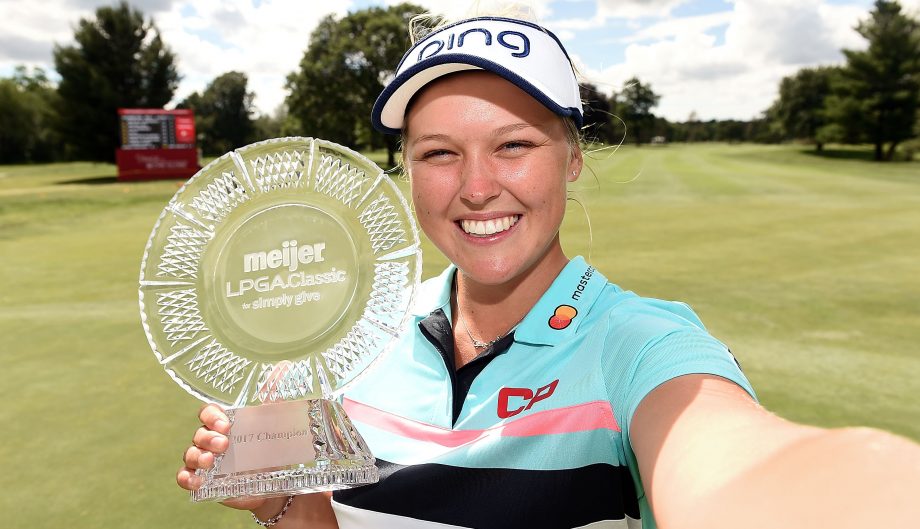 GRAND RAPIDS, MI - JUNE 18: Brooke Henderson of Canada imitates a selfie as she poses with the championship trophy during the final round of the Meijer LPGA Classic at Blythefield Country Club on June 18, 2017 in Grand Rapids, Michigan. (Photo by Stacy Revere/Getty Images)

With father and coach Dave Henderson and other family members watching, the 19-year-old Canadian won the Meijer LPGA Classic on Sunday for her fourth LPGA Tour title, holding off Michelle Wie and Lexi Thompson by two strokes in cool, windy conditions.

“It was just like the perfect day,” the Smiths Falls, Ont., native said. “My dad is my coach, he’s a great father to both my sister (caddie Brittany) and I, and he’s one of our best friends. He’s with us all the time, and he gave me a lot of lines early in the week that I didn’t know, that I wouldn’t normally take without him there. But he said, ‘If you want to win and you want to contend, you need to take these lines off the tee.’

“I did that and I had an advantage over the rest of the field all four days. So this win, I say it’s for him, but it really is for him because I probably wouldn’t have done it without him.”

Henderson closed with a 66 on the Blythefield layout that was reduced to a par of 69 – the fifth hole was played as a par 3 instead of a par 5 – the final two rounds because of flooding.

But she hadn’t won an LPGA tournament since, a winless drought that spanned nearly a year before breaking it Sunday.

“It’s kind of been a little bit tougher season for me, I haven’t got the results that I’ve been really looking for,” Henderson said. “But this week I played really well and things kind of started to turn around for me. So to get my fourth win is super exciting and I’m just excited for the rest of the summer now.”

Henderson had three birdies in a bogey-free round. She birdied Nos. 7 and 8, while Thompson faltered.

“I missed a short one on 10, which I would have liked to have, but then I made a great birdie on No. 11,” Henderson said. “I had zero bogeys on a day like today where it was super windy. And any day on Sunday, there’s that little bit of extra pressure and you’re in contention so you want to play really well so you might push a few more shots than you would like.”

Thompson was 1 over on the first five holes with two bogeys.

Thompson hit one of the longest drives of the day on No. 9, put her approach shot within 20 feet and made the birdie putt to tie for the lead. But she bogeyed No. 10 to fall out of the lead.

“I hit my driver great the whole day, so that was definitely a positive,” Thompson said. “I didn’t roll the putter that well today. It is what it is. I hit two great last putts. I almost made the two long ones.”

Wie shared the lead early in the round and wound up with five birdies and no bogeys.

“It was tough out there,” Wie said. “The wind just started blowing and it was just interesting. Some spots are really wet, some spots are dry, but overall I felt like I played good this week and I’m happy about it.”

Second-ranked Lydia Ko had a 68 to tie for 10th at 12-under. Top-ranked Ariya Jutanugarn, coming off a playoff victory last week in Canada over Thompson and In Gee Chun, had a 69 to for 22nd at 9 under.

Henderson said she’ll be taking the next week off after playing in a charity event Monday in Rhode Island. Her next tournament will be KPMG PGA Championship, where she’ll look to defend her title from last season.

“It’s really exciting and it gives me a lot of confidence going into that tournament knowing that I’m coming off a win,” she said. “Hopefully I can go there to Olympia Fields and defend the championship that really defined my career last year.”

.@BrookeHenderson goes bogey-free on her final round to win the @MeijerLPGA! See how she was Up To The Challenge in these highlights: pic.twitter.com/nON4CmRGrw