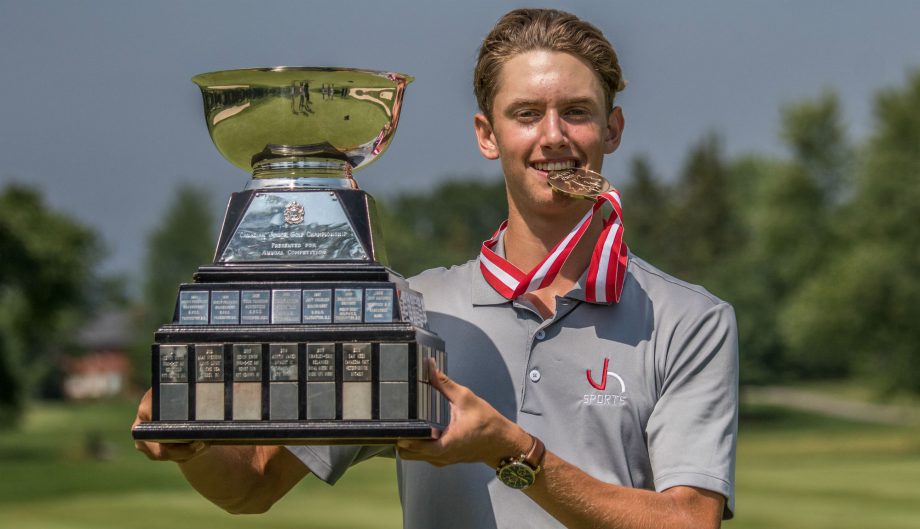 Ross catapulted to the top of the leaderboard after setting an amateur course-record 62 on Wednesday which allowed the 18-year-old from Fredericton, N.B., to cruise to a seven-stroke victory and finish at 9 under par for the tournament.

“I’m feeling great,” he said, standing on the 18th hole after his final putt. “I can’t really explain the feeling right now. It’s probably the most excited I’ve ever been.”

As Ross came down the final stretch in front of the large group of spectators who had been following his group for the round, he was greeted by even more people waiting at the 18th green for the champion to sink his final putt.

From over 20 feet out, Ross missed his birdie putt by a few inches and tapped in for par to claim his title in front of friends, fans and family.

“A lot of nerves,” he said, about heading down No. 18. “A lot of people out there watching. A lot of my friends, a lot of people cheering me on and with what was on the line I was quite nervous.”

His friends didn’t take long to express their excitement as they rushed him beside the green, dousing him in water in celebration.

“I’m soaked right not but it really pumped me up,” said Ross. “I’m happy to have friends that are cheering me on.”

Along with having his named engraved on the Silver Cup as the events 79th champion, Ross earned an exemption into the 2017 Canadian Men’s Amateur Championship at The Toronto Golf Club and Islington Golf Club in Toronto from Aug. 7-10.

Tristan Mandur, an 18-year-old from Mill Bay, B.C., earned silver medal honours after he carded a 1-over-par 71 in his final round to bring him to 2 under par for the tournament. Mandur managed to cut the lead to four strokes with five holes to play, but bogeys on holes 14, 16 and 18 saw him drop back to seven shots behind Ross.

Finishing one stroke back of Mandur, 15-year-old Christopher Vandette registered a final-round 70 to claim both bronze medal honours and the Jack Bailey Trophy for winning the juvenile division. The Beaconsfield, Que., product finished 1 under par for the tournament to claim the 16 and under division by two strokes.

“It feels pretty great,” said Vandette. “I’m so happy with my week and hopefully I can keep it going in the years to come.”

Christopher Vandette with all his awards from the #CDNJrBoys this week.

Nolan Thoroughgood from Victoria, B.C., earned the silver medal in the juvenile division after he finished at even par for the championship, and Ethan Choi was awarded the bronze medal after his 1 over par performance during the course of the week.