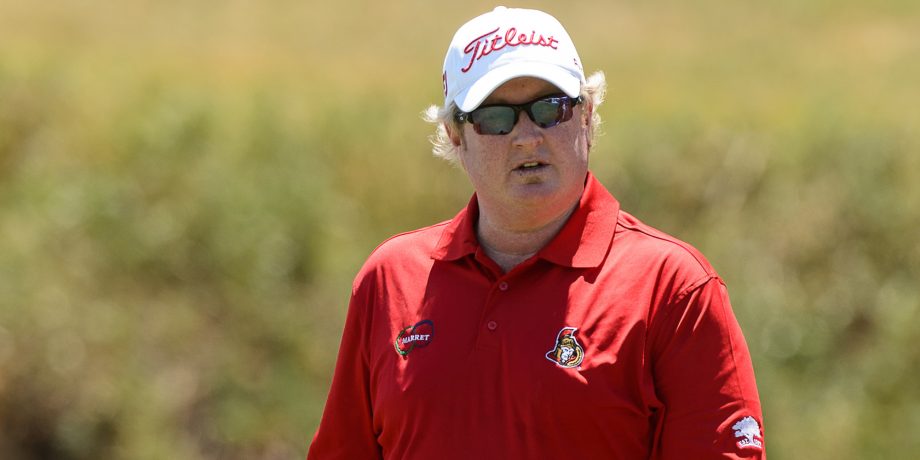 OAKVILLE, ON - JULY 22: Brad Fritsch of Canada walks to the seventh tee during round two of the 2016 RBC Canadian Open at Glen Abbey Golf Course on July 22, 2016 in Oakville, Ontario, Canada. (Photo by Minas Panagiotakis/Getty Images)

The PGA TOUR announced today that Brad Fritsch has violated the PGA TOUR Anti-Doping Policy’s ban on the use of performance-enhancing substances and has been suspended for three months. Mr. Fritsch self-reported this information after discovering that an ingredient in a supplement that he was taking was on the prohibited list. He has acknowledged his inadvertent error and accepted his suspension. He will be eligible to return on February 28, 2018.

That was a text I sent to my good friend Alex on Saturday Nov 11, the same day I had failed to advance at Second Stage of the Web.com Tour Q-School. Alex is a chiropractor, and he operates a really successful weight loss program out of his office as well. I had seen his commercials that run during the daytime soap operas (my WIFE watches General Hospital, not me; promise), advertising “lose a pound of fat per day.” My wife had done the program once before and lost 25 pounds. It seemed like the perfect time to, finally, lose some weight – I had turned 40 two days prior; I was pretty much the heaviest I’d ever been (242 pounds); and my kids were getting really fast. Plus, it looked like I would have a good two months off. I would lose the weight and simultaneously adapt my golf swing throughout the program with my instructor.

The majority of Alex’s program is low calorie, highly disciplined eating. You eat two meals per day (I did noon and 6pm), consisting of a small protein and whatever vegetables you want. Yes, I almost died in the first two weeks. If it sounds awful, that’s because it was. I tried to drink 120oz of water per day, and then took the supplements that every other program participant takes – a liquid multivitamin, even more vitamin D, a “body detox” solution, a probiotic, and a spray called BioSom.

“Hey, it’s not that spray that got Vijay in trouble, right?”

That was a text from November 30, from one of my brothers. I was telling him and my other brother what I was doing with the weight loss program. It felt like my heart sank into my stomach. I couldn’t believe that I hadn’t checked all of the supplements against our Anti-Doping list. I immediately sent a text to Andy Levinson, head of the Tour’s Anti-Doping program.

I should give some background on my feelings about the Tour’s Anti-Doping program, because it has a lot to do with how this has come to this point. I’ve been a huge advocate in expanding its transparency, both in meetings for the Web and PGA Tour and also in private conversations with multiple PGA Tour employees. I like the truth, and I hate rumor and innuendo. I’ve been adamant that we should publicize every offender, no matter the offense. Truthfully, I was mainly thinking of recreational testing when I formulated my opinion, and never for one second considered I would one day be a part of a potential “performance enhancing” violation. The only thing I would ever test positive for is excessive Chick Fil A.

And so it was with my view of the Anti Doping program in mind that I texted Andy Levinson that day. Truthfully, it was 10% my assumption that everything was fine; however, it wasn’t fine. That last supplement ended up containing a substance called DHEA, and it is indeed banned on our Anti-Doping list. But 90% is my dislike of hypocrisy. How could I sit there all those times and say “if it happens, it’s the truth, and if it’s the truth, get it out there,” and when it was my turn, just lie about it?

I couldn’t. It’s not who I am. I believe in the program and if I’m to be suspended, then so be it. It is my own fault that I’m in this position.

I’m just so upset with myself that I didn’t think to question what was in the supplements. But I never did. And in the program rules, it stipulates that a self-report is the same as a positive test. I did know this when I sent the text to Andy Levinson – like I said above, I believe in the program. I’m a proud member of the PGA Tour and I don’t take that lightly. If there is any silver lining, it’s that I thankfully never played a competitive round during all of this. I don’t feel great about this situation, but I’ve had over a month to kind of process my feelings about it. I’m in a good place (and I’ve lost 28 pounds, so I’ve got that going for me). I’m not sure I’d feel exactly the same way if I had competed against my peers while using a banned substance, even if it was out of ignorance.

I’d like to express my thanks and appreciation to my family, friends, and especially my sponsors, for their unwavering support.

I also want to thank the PGA Tour, Commissioner Jay Monahan, and Andy Levinson for bringing this to a speedy resolution.

To all those who believe in me, who cheer for me, who respect me – I hope those three things don’t change.