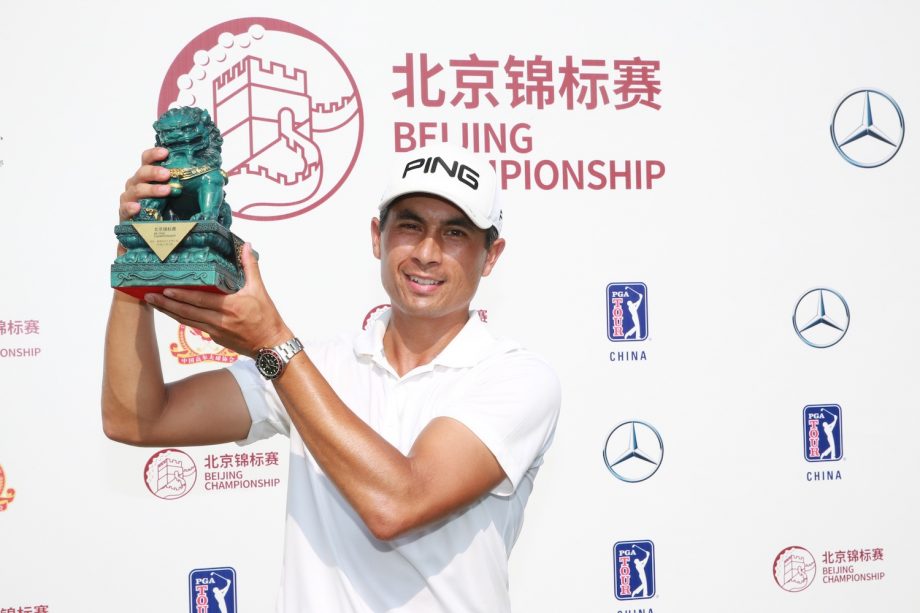 BEIJING, CHINA—Canada’s Peter Campbell shot a closing 70 to hold off China’s Huilin Zhang and win his first pro title at the RMB 1.5 million Beijing Championship, the ninth event of this year’s PGA TOUR Series-China. Campbell, 35, is the third Canadian to win on Tour, following 2015 winners Justin Shin and Eugene Wong.

The left-hander held a two-stroke lead after the second and third rounds at Topwin Golf and Country Club, and finished 17-under, just one ahead of playing partner Zhang (68), a winner on the Tour in 2015 and 2016.

Korean Woojin Jung (69) was third at 15-under, one ahead of American Ryann Ree (70), while Korean Todd Baek (68), winner of May’s Haikou Championship, shared fifth at 13-under with American Sejun Yoon (72), who also played in the final group.

Singapore’s Quincy Quek (71) was alone in seventh at 12-under, one ahead of Japan’s Yuwa Kosaihira (64), while Hong Kong’s Motin Yeung (70), Canada’s Justin Shin (71) and Thailand’s Gunn Charoenkul (68) tied for ninth at 10-under. Kosaihira and Yeung both tied American Charlie Saxon and England’s Callum Tarren for most top-10s this year with four.

Campbell, who previously played on the Mackenzie Tour – PGA TOUR Canada and PGA TOUR Latinoamerica, had even considered withdrawing ahead of the Beijing Championship after missing the cut in the previous two events, but decided to play with a “no-care attitude” at Topwin that helped him cope with the pressure of leading.

“It worked. I don’t know how I did it. I mean, nothing really phased me out there. It’s unlike anything I’ve ever done before, so definitely something to think about going forward,” said Campbell, who was joint-second after 54 holes of the Chongqing Championship in March before a 74 left him tied 14th, his best result in the first eight events.

“It’s just awesome. This just came out of nowhere and I was able to put some good swings together. It was a tough day, we had a good group, we all battled out there and luckily I was able to come away with it.”

Campbell opened with a birdie, bogeyed the fifth and birdied the eighth to make the turn one ahead of Zhang, who birdied Nos. 4, 7 and 8 as temperatures again reached 34 degrees Celsius in Beijing.

Campbell birdied 12 and 13 to stay one ahead of Zhang, who started the back nine with a bogey and three birdies. The Florida-based Canadian doubled his lead on 14 when he sunk a tricky putt for par and Zhang missed a shorter par putt.

However, Campbell’s lead was back to one after he three-putted the par-3 16th, but two closing pars were enough for the win, with Zhang’s birdie putt on 17 lipping out.

“We were trading shots out there, it was fun,” said Campbell, who spends summers with his family back in his native Nova Scotia. “We hit some really good shots and we holed some good putts. Luckily, I was able to stay ahead for most of the day.”

Zhang, 28, produced his best performance of the season, with a tie for 11th at the Changsha Championship in May his highest finish until his return to Topwin.

On the par-5 closing hole, Zhang missed the green with his 5-wood second shot and was unable to get close enough with his chip to give himself a strong birdie chance, but was otherwise delighted with his week.

“My swing and putting were great this week. I was very focused on my game and this is my best result in the past two years,” said Zhang, who just missed out on last year’s Web.com Tour after finishing sixth on the 2016 Order of Merit.

“This was a great round and I became more confident as the day went on. I hope I can play well in the remaining five events and I’ll try to finish in the top-five to get onto the Web.com Tour.”

Every tournament on this year’s PGA TOUR Series-China offers RMB 1.5 million, a 25-percent increase over purse levels from 2016.