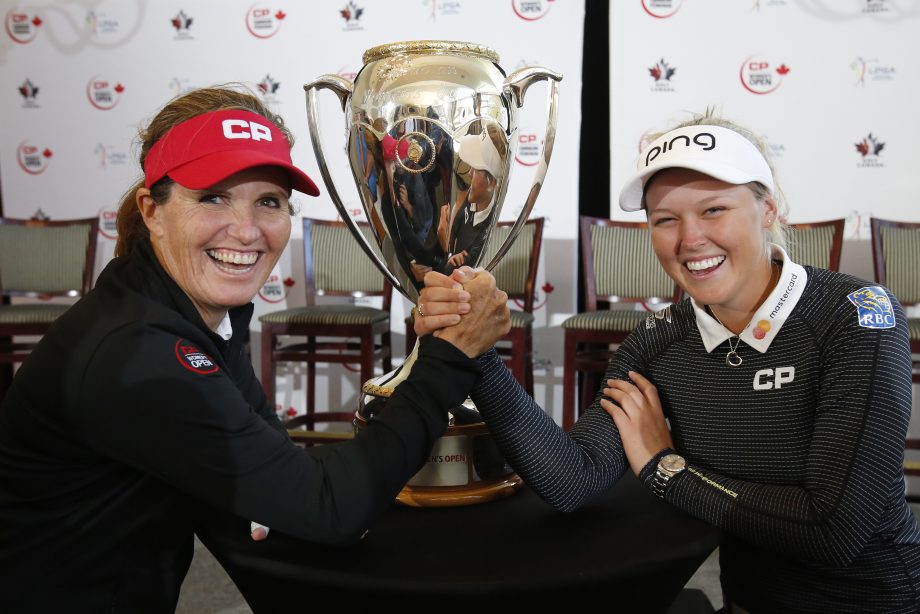 As part of Canada 150 celebrations, the nation’s capital is hosting the stars of the LPGA Tour, including a strong Canadian contingent led by last week’s LPGA Tour winner Brooke Henderson. Golf Canada, in partnership with Canadian Pacific (CP), has announced many of the world’s top players have committed to play in the 2017 CP Women’s Open from August 21-27 at the Ottawa Hunt & Golf Club.

Defending champion Ariya Jutanugarn leads a stellar list of early commitments set to challenge for the $2.25 million USD purse, one of the largest prizes on tour. A six-time winner on the LPGA Tour, the Thailand native recently climbed to No. 1 in the Rolex World Rankings following her victory at the 2017 Manulife LPGA Classic in Waterloo, Ont.

Three-time CP Women’s Open champion and world No. 2 Lydia Ko of New Zealand will be searching for a record fourth Canadian Women’s Open title. Ko’s three Canadian titles (2012, 2013 and 2015) ties the 20-year-old with Meg Mallon and Pat Bradley for most victories at Canada’s National Women’s Open. A 14-time winner on the LPGA Tour, Ko held the No. 1 world ranking for 85 weeks prior to Jutanugarn.

World No. 3 So Yeon Ryu, who won the inaugural CP Women’s Open in 2014, will also compete at Ottawa Hunt. Jutanugarn and Ryu are among nine of the top-10 players on the LPGA Tour Official Money List who have confirmed their intention to compete in the nation’s capital later this summer.

No player will generate more excitement this August in Ottawa than Canadian sensation Brooke Henderson of nearby Smiths Falls, Ont., who will compete in her seventh career National Open, this time in front of hometown crowds at Ottawa Hunt & Golf Club.

Coming off her impressive come from behind win at last week’s Meijer LPGA Classic, the four-time winner and major champion has amassed 18 top-10s since joining the LPGA Tour in late 2015.

The graduate of Golf Canada’s National Team program is a former world No. 1 amateur and represented Canada at the 2016 Olympic Games in Rio de Janeiro, Brazil where she finished T7.

A proud ambassador for CP, Henderson will lead the Canadian contingent into Ottawa as part of the Canada 150 celebration events being hosted in the nation’s capital. World No. 71 and Canadian Olympian Alena Sharp of Hamilton will look to improve on her top-five finish at the 2016 CP Women’s Open as she competes in her national

Open for the 13th time. Canadian Golf Hall of Fame honoured member and CP ambassador Lorie Kane, a four-time winner on the LPGA Tour will be competing in Canada’s National Open Championship for a record 27th consecutive time.

The world’s best will be at Ottawa Hunt to compete for the CP Women’s Open trophy, with a strong Canadian contingent led by Smiths Falls Brooke Henderson.

LPGA Tour members Jennifer Ha of Calgary and Maude-Aimée LeBlanc of Sherbrooke, Que., are also set to compete and will be joined by several more Canadians to be announced in the coming weeks.

Jutanugarn, Ko and Ryu will be among 10 past champions competing this year along with Brittany Lincicome (2011), Michelle Wie (2010), Suzann Pettersen (2009), Cristie Kerr (2007) and Katherine Kirk who won the event in 2008 when Ottawa Hunt last hosted the stars of the LPGA Tour.

The field of 156 golfers teeing it up at Ottawa Hunt is expected to again represent arguably the strongest field on the LPGA Tour, carrying over from the 2016 event which welcomed 96 of the top 100 players on the LPGA Tour money list.

“We are thrilled to bring the stars of the LPGA Tour back to Ottawa Hunt as part of the special Canada 150 celebrations happening in the nation’s capital and across Canada in 2017,” said Tournament Director Brent McLaughlin.  “Ottawa is a tremendous golf market with passionate golf fans and no doubt the global stars of the LPGA Tour and Canadian talents led by hometown hero Brooke Henderson will make for a truly special event in 2017.”

Information regarding tickets, volunteer opportunities and corporate hospitality for the CP Women’s Open can be found at www.cpwomensopen.com.

Now in its fourth year, CP’s community investment program, CP Has Heart is committed to raising funds in support of children’s heart health in the host community of the CP Women’s Open. The 2017 edition of Canada’s National Women’s Open is proud to have the Children’s Hospital of Eastern Ontario (CHEO) as the beneficiary charity.

The CP Has Heart fundraising activities tied to the CP Women’s Open and CHEO are part of CP’s overarching “Beautiful Hearts” campaign across the Ottawa region which will also run during the CFL regular season, playoffs and Grey Cup

The “Beautiful Hearts” campaign will support the refurbishment of facilities that patients use every day at CHEO and the University of Ottawa Heart Institute and celebrate the resiliency and spirit of the human heart.

“At CP, we take great pride in our history of connecting Canada and are thrilled to be in Ottawa for this celebration connecting Canadians with the world’s best golfers – including our CP Ambassadors Brooke Henderson and Lorie Kane – and connecting CHEO with opportunities to further its important work,” said Keith Creel, CP President and CEO.

“Our family of 12,000 railroaders is excited about the tournament, but more than that, we are excited to leave a charitable legacy in the nation’s capital. CP Has Heart’s ‘Beautiful Hearts’ campaign will bring crucial support to both CHEO and the Ottawa Heart Institute this year.”

Each year, CHEO touches the lives of more than 500,000 infants, children and youth from Eastern and Northern Ontario, Western Quebec and Nunavut. To better care for these patients, CHEO will be embarking on a $1.8 million project to upgrade the hospital’s Catheterization Lab and Interventional Suite. A redesigned space, specialized equipment and pediatric specific training will be critically important elements in the health and wellness of CHEO’s patients.

Through August 27, 2017, CP will match all donations made towards pediatric cardiac care and research at cheoheart.com. CP will also donate $5,000 to CHEO for every birdie made by a player on the 15th hole at Ottawa Hunt during this year’s championship.

The 15th hole will also feature the 15th Green CP Fan Zone where golf fans can donate $20 to upgrade their grounds pass to access a covered greenside bleacher and viewing area with all proceeds to benefit CHEO.

Since 2014, the CP Has Heart charity campaign has raised more than $4.5 million in support of children’s heart health.