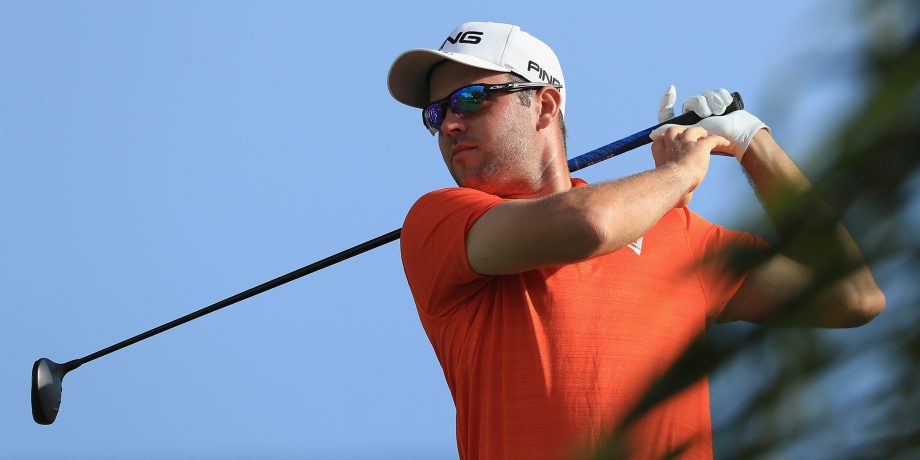 HONOLULU, HI - JANUARY 09: Corey Conners of Canada plays a shot during practice rounds prior to the Sony Open In Hawaii at Waialae Country Club on January 9, 2018 in Honolulu, Hawaii. (Photo by Sam Greenwood/Getty Images)

HONOLULU – Zach Johnson and Chris Kirk each made seven birdies and shared the lead in the Sony Open.

Jordan Spieth made eight birdies and for the second straight year walked away from Waialae Country Club amazed that he could be six shots behind.

A year ago, it was because Justin Thomas shot 59 playing in the same group.

On Thursday, it was one hole.

Spieth hit four trees with four shots on the par-4 eighth hole – his 17th of the opening round – starting with a tough break when his tee shot caromed off the trunk of a tree and down an 8-foot deep ditch that left him no good options. He wound up with a quadruple-bogey 8 and had to settle for a 69.

He signed his card, signed autographs and declined requests to speak to the media.

Johnson and Kirk kept clean cards playing on opposite sides of the draw and closed with different brands of birdies on the par-5 18th hole – Kirk two-putted from about 10 feet, while Johnson found a bunker, laid up and hit a wedge to 5 feet.

They were a shot ahead of Brian Harman, Vaughn Taylor, Kyle Stanley and PGA Tour rookie Talor Gooch.

Mac Hughes of Dundas, Ont., and Corey Conners of Listowel, Ont., shot 70’s and Ben Silverman of Thonrhill, Ont., was 1 over 71.

Thomas, who set the PGA Tour scoring record for 72 holes in his wire-to-wire victory, opened with a 67 and was all smiles at the end. Thomas, an Alabama alum, won a bet on the college football championship that required Georgia graduate Kevin Kisner to wear a Crimson Tide jersey on the par-3 17th.

“It’s definitely the best Kis has ever looked in a jersey,” Thomas said.

Kisner kept the jersey and plans to auction it off for charity. He shot 68.

More than half of the field – 77 players – broke par in the mild trade wind and relentless sunshine down the road from Waikiki Beach.

Kirk had only one top 10 last year – his final event of the year in the RSM Classic at Sea Island – and nearly two months off didn’t appear to half any momentum. He might have been rusty, but not when it comes to island life.

Because of the chilly weather in the South, Kirk brought his family out to Oahu a week ago Monday. He practiced a little in the morning at Ko Olina and hung out with his wife and children in the afternoon. He realized how littlegolf he had played during the short off-season when he reached into his bag and found golf balls that he had marked for the final round at Sea Island.

“I’ve probably been off long enough now that you never know what’s going to happen,” he said. “I really had no expectations whether I was going to play good or bad after having some time off. But this is a golf course that I’ve traditionally done pretty well on, and a place that I really love. So you always feel like it’s possible.”

Dry weather, a fast course and the trades allowed a rarity for Johnson, who hit wedge into the green on the 480-yard opening hole. That was first of three straight birdies, and he had ample more opportunities, including a shot that hit the pin on No. 10 and settled 3 feet away. He missed that, though the two-time major champion wasn’t too discouraged. He picked up an unlikely birdie on the 13th from the fairway bunker by making a 25-foot putt, and he made a 20-foot birdie on the next hole.

“Just kept the course in front of me and played solid golf,” Johnson said, winless since the 2015 British Open at St. Andrews. “Made a few putts, missed a few putts. But I’m very encouraged with the direction.”

Spieth played well enough to be right there with them except for a pair of long three-putt bogeys – and that one tee shot.

His drive on No. 8 was not terribly offline, and the trees to the left are a common spot. This one hit the trunk of a tree and tumbled down a wide (and dry) ditch about 8 feet below the fairway. He studied his options. He found none.

He could have dropped it with a penalty stroke, but there was nowhere to go. His plan was to hit out of the sandy base of the ditch toward the trees closer to the fairway. If it hit the trees and dropped out, he would have been closer than the drop and at least had an opening to the putting surface.

It hit one of the smaller branches and came back toward him, about a yard short of go back down into the ditch. For his third shot, he had a gap toward the front of the green (the pin was back left), but out of a fluffy lie, the ball came out high and hit more trees, bouncing left and settle near another tree.

Next, he had to go under the tree in front of him and over a tree guarding the green. He only got the first part right.

At this point, he was lying 4 and was only a few yards away from the second tee, waiting for another group to tee off. His only choice there was to dump it into the bunker, where the sand was thin. He hit that out to 30 feet and two putts later had a snowman (8).