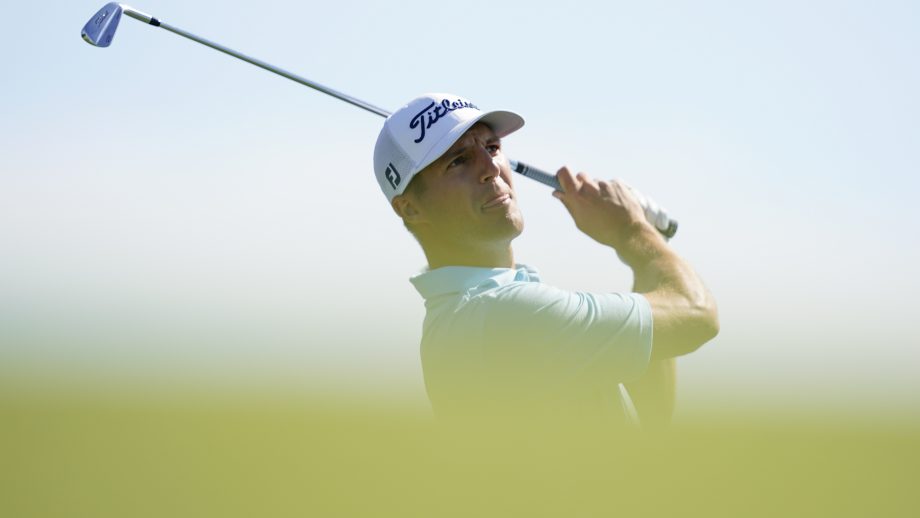 Garrett Rank watches his tee shot on the 11th hole during a practice round ahead of the 2018 U.S. Open at Shinnecock Hills Golf Club in Southampton, N.Y. on Monday, June 11, 2018. (Copyright USGA/Darren Carroll)

SOUTHAMPTON, N.Y. — It was a dream, one that hardly even seemed possible, back in the days when Garrett Rank was a member of Golf Canada’s National Men’s Team from 2012-14.

One of his teammates was Mackenzie Hughes and now, four years later, the band will be back together again, this time on one of golf’s biggest stages.

Rank and Hughes have taken different paths to get to this U.S. Open at the demanding, undulating and windswept Shinnecock Hills, but they will be together Thursday morning, along with Australian Aaron Baddeley, at 7:18 a.m. off the 10th tee.

Rank, from Elmira, ON, has been one of the popular stories in the early days of the tournament. Coming off his second full season as a referee in the NHL, he has been a media darling. He was the first player in the media centre on Monday and has done a steady stream of interviews since.

The 30-year-old deserves all the attention he has been getting, from winning a battle with testicular cancer in 2011 to putting together an impressive amateur career to establishing himself as a referee in the best hockey league in the world.

He had a hat trick at the Canadian Mid-Amateur championship, winning it three times in a row and finished runnerup in the 2012 U.S. Mid-Am. Winning the Canadian Mid-Am got him a ticket to three RBC Canadian Opens, making the cut in 2016. (Last year, he played the par-3 seventh hole, made to look like a hockey rink, in a referee’s sweater).

This season, despite being limited to less than a dozen rounds of golf during the winter as he worked 73 regular-season games in the NHL, he qualified for the U.S. Open with a pair of 71s at the Ansley Golf Club’s Settindown Course in Atlanta.

After playing 14 holes with Hughes, from Dundas, ON, and Adam Hadwin of Abbotsford, BC, on Tuesday, Rank put in a good session on the range with coach Dave Smallwood and was then interviewed live on The Golf Channel.

The whirlwind will ease Thursday morning when he can step onto the tee where there will be a familiar face.

“That was great for me. I couldn’t have got a better group, I don’t think,” Rank said. “I attended Mackenzie’s wedding. We’re great friends. We played on the Canadian national team for three years together, so very comfortable. It will be kind of nice for me, as I’m sure I’ll be really anxious and nervous and just to have that familiar face beside me in battle is huge.

“And then it’s cool, like Aaron Baddeley growing up was a huge name and still is a big name in golf. Secretly, it’s cool. Like I saw all the guys on the range today and I’m just there kind of like a little fan boy, so it’s cool to see those guys and be able to play with them, as well.”

Canada’s Garrett Rank is a popular man this week at the #USOpen ??⛳️? @golfchannel

Stephen Walkom, the NHL’s director of officiating, said the same qualities that make Rank an up-and coming referee serve him well on the golf course.

“I think he’s going to be really happy when the tournament starts,” Walkom said. “Once the tournament starts, it’s like a hockey game starting. He’s going to feel at peace, I’m sure. In golf, you have to be mentally tough and I think there are similarities with hockey, recovering quickly from a bad shot or a missed call. Garrett’s got a real passion for hockey and for the game of golf.

“On behalf of all the guys (on the officiating staff), we’re all extremely proud of Garrett and all that he’s accomplished qualifying for the U.S. Open. All the guys are going to enjoy it and wish him the best of luck. It’s great for Garrett. He’s going to have the chance to do something he dreamed about as a kid.”

With the spotlight turned on him, Rank has been taking the opportunity to spread the word Canada isn’t just about hockey.

“Yeah, growing up in Canada, you’re kind of born with a pair of skates on your feet, so hockey is probably our number one sport. But golf is getting there,” he said. “I’ve had a great opportunity with Golf Canada for three years on their Canadian Men’s National Team and have represented them in many international competitions. Obviously, I owe a huge debt to them. I wouldn’t be here without the guidance and support their staff has given me.”

Rank said his goal is to make the cut at Shinnecock. He said he had some issues with the wind, which shifted from the east to southwest on Tuesday, and that’s what kept him on the range.

Rank’s coach, David Smallwood, said what Rank has done getting here is remarkable for a guy who has a full-time job.

“You know what? For somebody who spends 72 nights dropping a puck, this is a part-time gig for him. He gets a few opportunities (to play) when he refs some Florida games and some mini-camps with me in Florida. We’d like it to be a couple more, but he’s busy with all the travel and stuff.

“It’s not the best situation to be able to come out here and compete with the best players in the world, but he’s a helluva an athlete, a helluva player and a helluva guy. When you have talent, you have talent. Is he as sharp mentally? Does he not question stuff because he’s a little rusty or not? He’s had three or four tournaments in the spring. He’s had some playing time. He just hasn’t had the range time.

“It’s a whirlwind,” Smallwood said as Rank headed off to talk to The Golf Channel. “We were planning on being out of here by now just relaxing at the house. It hasn’t worked out that way, so we’re going to do some chipping, some putting, some media. It’s a busy week.

“It’s a bucket list thing and we’re just all so excited about his opportunity this week.”