Champion to earn an exemption into 2020 RBC Canadian Open and

The world’s best amateur golfers are set to compete in the 115th Canadian Men’s Amateur Championship in Halifax, Nova Scotia being hosted at both Glen Arbour Golf Course and the Links at Brunello from Aug. 5-8, 2019.

This championship was first held in 1895, making it one of the most storied sporting events in Canada and the third oldest amateur golf championship in the world. Glen Arbour Golf Course will host over 240 players for four days of stroke play.  The Links at Brunello will co-host the first two rounds which will result in a cut after 36 holes.

Glen Arbour Golf Course has hosted the 2019 Atlantic Championship, 2012 TELUS World Skins Game, 2009 Mike Weir Miracle Drive Foundation tournament, and the 2005 BMO Canadian Women’s Open. Designed by Canadian golfing icon Graham Cooke, Glen Arbour was constructed for all levels of play. The course is expertly designed and a meticulously maintained, making it a test for golfers of all abilities by offering challenging greens, beautiful scenery and superior service. This 18-hole champion course provides great diversity in hole design, challenging elevation changes and a demanding layout. In addition to the 6,800-yard, par 72, 18-hole course, there is a 9-hole par 3 executive course as well as practice facilities on site. 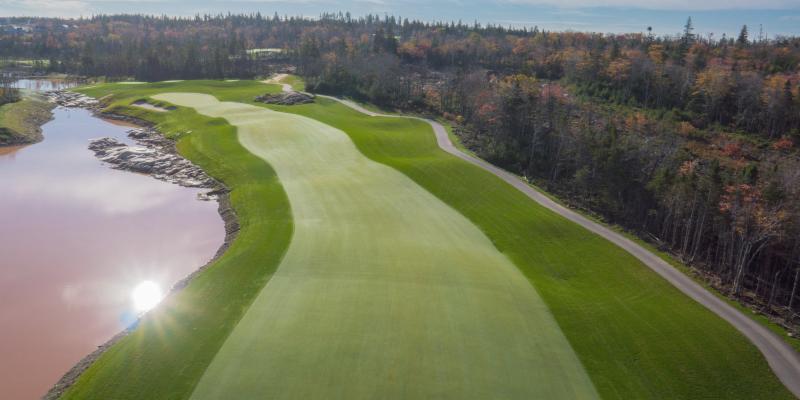 Number 4 at the Links at Brunello

The co-host The Links at Brunello was ranked #3 Best New Golf Course in North America for 2015 by Golf Digest. It has quickly earned the reputation of being one of the toughest courses in Nova Scotia. Designed by the legendary architect Tom McBroom, Brunello is carved from thick forests nestled amid gigantic granite boulders and boasts of stunning vistas. The Links at Brunello offers stunningly manicured bent grass tees, greens and fairways. The views combined with the natural beauty will be a test for these top competitors. 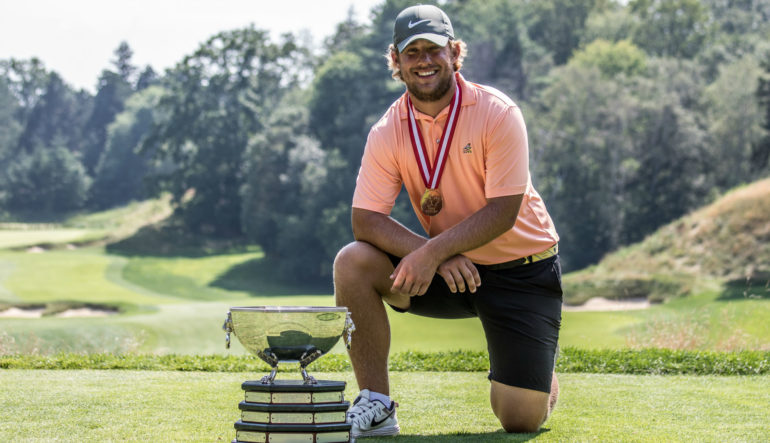 Zach Bauchou of Forest, Va. Is the back-to-back defending champion having claimedthe title in both 2017 and 2018. He is the 22nd American to capture the Canadian Men’s Amateur crown and only the 13th back-to-back champion in history.

Current PGA TOUR Canadians’ Mackenzie Hughes (Dundas, Ont.) and Nick Taylor (Abbotsford, B.C.) are recent winners of the event. Taylor won it in 2007 while Hughes won back-to-back titles for 2011-2012. Recent PGA Tour winner Corey Conners finished second at the Canadian Amateur in 2013. A full field of the nation’s top competitors are expected to head east and compete for the Earl Grey Trophy and the title of Canadian Men’s Amateur champion. In conjunction with the first 36 holes of the competition an inter-provincial team championship will be played with teams of three members vying for the Willingdon Cup. After the first two rounds, the field will be reduced to the low 70 and ties for the final two rounds contested at Glen Arbour.

In addition to claiming the title of 2019 Canadian Men’s Amateur champion, the winner will earn exemptions into the 2019 U.S. Amateur at Pinehurst Resort & Country Club in the Village of Pinehurst, N.C. and also entry in the 2020 RBC Canadian Open at St. Georges Golf & Country Club in Toronto ON. The champion will also be eligible to receive an exemption into the U.S. Junior Amateur, the U.S. Mid-Amateur or the U.S. Senior Amateur, if applicable.

The Canadian Men’s Amateur Qualifier will be played at Glen Arbour Golf Course on Aug. 2 where a minimum of five spots at the national tournament will be awarded. Additional information can be found here.

In total, about 500 visitors (players, coaches, caddies, friends and family members) are expected to spend up to a week or more in the Halifax area for this multi-day competition. Supported by upwards of 200 volunteers from across Nova Scotia. To register to volunteer for the 2019 Canadian Men’s Amateur Championship, click here.

GOLF CANADA AMATEUR CHAMPIONSHIPS
Golf Canada annually conducts more than 20 championships nation-wide which play host to more than 3,000 domestic and international athletes from all corners of the world. In partnership with our host clubs, thousands of volunteers, provincial golf associations and our proud sponsors, Golf Canada is dedicated to supporting player development, through world-class competition, since our inception in 1895. Officiated by certified Canadian Rules of Golf officials, Golf Canada’s amateur competitions are fully compliant with golf’s international governing bodies and include marquee events such as the Canadian Men’s and Women’s Amateur Championships as well as the Canadian Junior Girls and Junior Boys Championships. Golf Canada’s amateur championships are proudly supported by RBC, Canadian Pacific, Sport Canada, Levelwear, Titleist and FootJoy. For more information and scheduling visit www.golfcanada.ca/competitons.

GOLF CANADA
Golf Canada is the National Sports Federation and governing body for golf in Canada representing 319,000 golfers and 1,400 member clubs across the country. A proud member of the Canadian Olympic Committee, Golf Canada’s mission is to grow participation, excellence and passion in the sport while upholding the integrity and traditions of the game. By investing in the growth of the sport and introducing more participants of all ages to the game, our goal is to be relevant to and respected by all Canadian golf enthusiasts from coast to coast. For more information about what Golf Canada is doing to support golf in your community, visit www.golfcanada.ca.