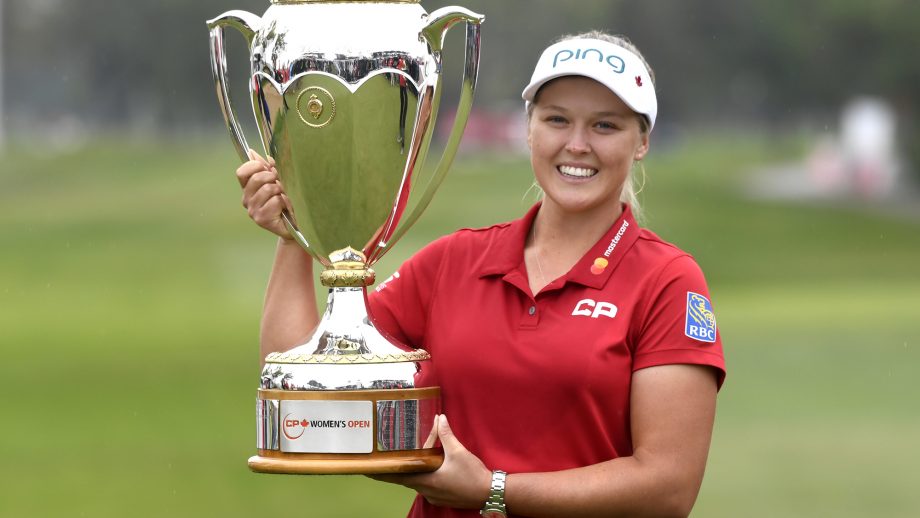 There was a quiet poise to Brooke Henderson on that Sunday morning last summer in Regina ahead of her final round at the CP Women’s Open.

She had experienced big moments before: her first LPGA Tour win as a 17-year-old in 2015, her first major victory a year later, her first appearance at the Olympics.

This tournament was different.

No Canadian had won the national open since Jocelyne Bourassa in 1973. Supporters who crammed the galleries could sense something special was happening.

Henderson would deliver in emphatic fashion, firing a closing-round 65 for a four-shot victory.

“The 18th hole, standing on that green, surrounded by family and friends and hundreds of fans and spectators cheering me on – it was sort of a surreal moment,” Henderson said. “To finally hold that trophy that I’ve dreamed about since I was a little girl, it gives me chills just thinking back on it.”

It was one of two tournament titles and 11 top-10 finishes for Henderson last season. On Wednesday, she was rewarded for her stellar campaign by being named a repeat winner of the Bobbie Rosenfeld Award as The Canadian Press female athlete of the year.

Henderson, who has won the award in three of the last four years, picked up 30 of 54 votes (55.6 per cent) in a poll of broadcasters and editors from across the country.

“Especially this year being an Olympic year with all the great athletes that competed in the Winter Olympics, it’s a big honour and I’m just really proud to take home this award again,” said Henderson, who was also named Postmedia’s Female Athlete of the Year.

With wet weather in the forecast, Henderson had an early start for her final round at the CP Women’s Open. Showing no sign of nerves or timidity, she lashed her opening drive down the fairway and birdied the hole for a two-stroke lead.

Angel Yin, Sung Hyun Park, Su Oh and others tried to make charges that day but Henderson wouldn’t buckle. In fact, the Canadian found another gear.

Henderson pulled away with four straight birdies on the back nine and tapped in a birdie putt on the 18th hole to send the crowd into a tizzy. Her seventh career LPGA Tour victory moved her one behind Sandra Post’s record for all-time wins by a Canadian.

“The blinders were on,” Post said. “She was looking at the finish line and she just looked like it was hers. She wasn’t nervous. It was hers.”

Henderson, from Smiths Falls, Ont., remained steady and consistent throughout the year. She won the Lotte Championship last April in Hawaii, earned US$1.47 million over the season and finished ninth in the world rankings.

“Big performances on the biggest stage amongst stiff competition in one of the highest-profile sports in the world,” said Edmonton-based Postmedia editor Craig Ellingson.

Henderson was fourth in scoring average (69.99) on the LPGA Tour, eighth in driving distance (268-yard average) and fourth in greens in regulation (74.5 per cent).

Her short game statistics were middle of the pack. Henderson was 72nd in putting average (29.7 putts per round) and 87th in sand saves (43.7 per cent).

“It’s easy to get down on yourself when things aren’t going perfectly,” Henderson said. “I feel like I stayed really patient through the majority of the year. When things were not very good, they always turned around. You just have to wait them out and I did that.

“Even going into the CP Women’s Open, I was in contention a few times and wasn’t able to get the job done. But I feel like I learned from those experiences and then when I put myself in position in Regina, I wasn’t going to let it go that time. I was able to seal the deal.”

Bobbie Rosenfeld, an Olympic medallist in track and field and a multi-sport athlete, was named Canada’s best female athlete of the half-century in 1950.