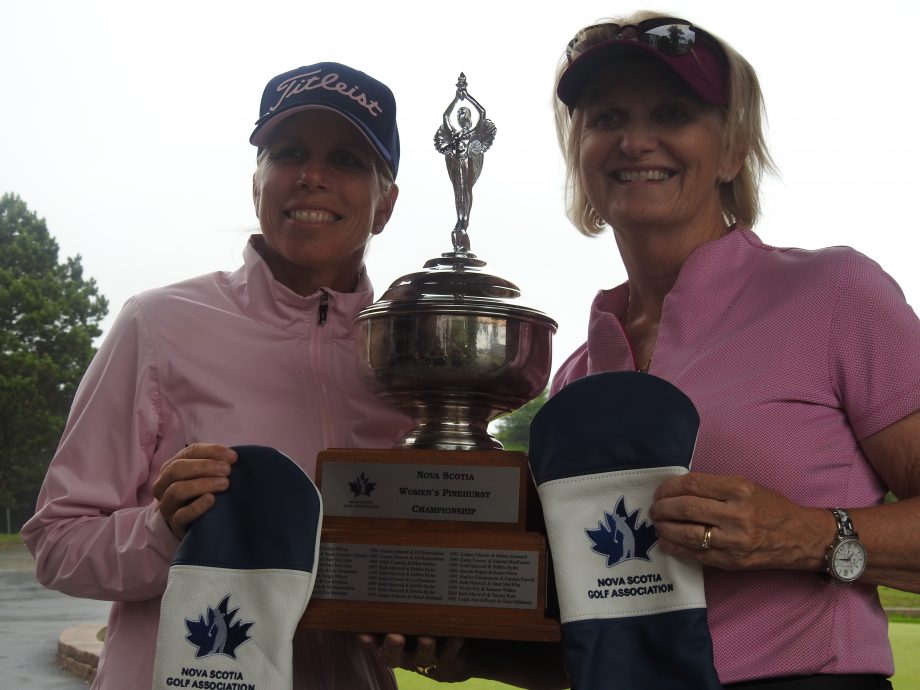 Joanie McCarville and Jan Gaudette win the
2019 NSGA Two Ball Championship
The rain did not stop the 156 players today from competing in the 2019 Women’s Two-Ball. The morning draw dealt with some periods of heavy downpours but they fought on. The afternoon draw lucked out with dry weather for the most part. All in all, it was a very successful day. The ladies enjoyed an amazing meal after their round, prepared by the Brightwood kitchen staff. We are all very thankful for everyone who made today a success!
The team of Joanie McCarville and Jan Gaudette of Ashburn have won the 2019 Championship after firing a team score of 74. The team battled the tough Pinehurst format and weather conditions to come out on top. Both were very pleased with their win. This is their first two-ball win as team.
Finishing second overall was Karen Munn and Tracy MacKay from Truro. The team carded a 75 and finished one stroke behind the champions.

In the second division, the team of Mary Besson and Meredith Palmer from Ashburn carded an 83 to win by retrogression. Taking second place is Rachel Thomson and Kimberly Morash of Brightwood.

Winning the third division was the team of Cathy Beaton and Patty Menard from Antigonish, after firing a team score of 88. In second place through retrogression was Rose Marie Stewart and Barbara Curry of Abercrombie.

Karen Miller and Roxcy Verge of Penn Hills took the win in the fourth division. The team came in with a score of 91 to secure the top spot in their division. Second place team of Sherri Cariou and Theresa Bellefontaine of Penn Hills carded a 93 today.

Thank you to all the competitors of the 2019 Women’s Two Ball Championship. We hope you had a great time and that we will see you again next year.