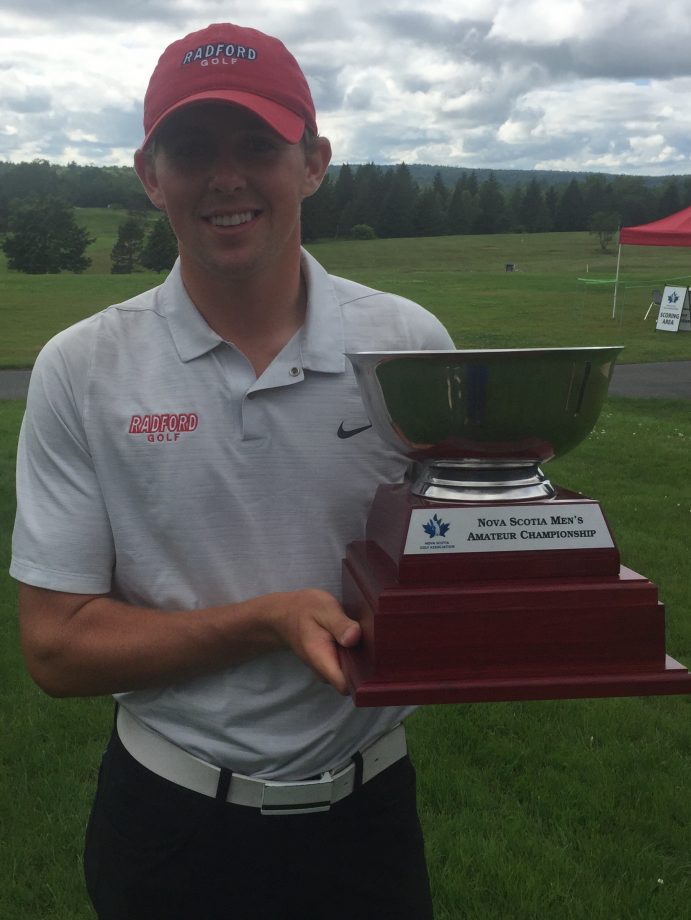 Only the rain could slow Myles Creighton down during the final round of the NSGA’s MCT Insurance men’s amateur championship at Oakfield Golf and Country Club.
After heavy showers delayed the start of Saturday’s final round by two-and-a-half hours, the Ashburn golfer picked up where he left off. The 54-hole leader fired a 4-under 68 for a 10-stroke victory and his first amateur title.
“Just being from Nova Scotia, this is one championship that means so much,” said the 21-year-old, who at 8 under for the tournament was the lone golfer in red numbers.
“If you grew up in Nova Scotia and you don’t want to win this, that just doesn’t make sense to me. I’ve wanted to win this for a long time and I’m happy to get it done.”
Creighton said the delay didn’t affect his approach to the final round.

“I went out there like it was any other day, like I was playing with my buddies,” he said. “You just try to go out and make birdies. The delay didn’t make much difference. Everyone had to deal with it. I had a later tee time so I was just chilling at home. It was pretty laid back.”

Intermittent showers were still falling when they hit their tee shots and the fairways were soggy underfoot. The lift, clean and place rule was in effect for the entire round.
Creighton said the soft, wet conditions made the course play longer and a tad more difficult.
“I would say it played easier on the first day when there was no wind and the course was firmer,” said Creighton, who finished with six birdies and a pair of bogeys for his round.
“It was like dart golf: you hit it and it would stop. Today with the soft greens, the wedges in would make the ball spin more. It was another thing you had to think about.”
Oakfield’s Greg Black slid in a tricky birdie putt on the difficult par-4 18th for a 1-over 73 to finish alone in second place.
“That was a huge putt,” said the 33-year-old. “I kind of got lucky when it went in but it was nice to see it fall because it was a struggle out there.
“The way Myles was playing it was very obvious after five or six (holes) it was a battle for second place. Thoughts changed drastically from trying to win the tournament to try to get second and make the (provincial) team. It was an adventure and I eventually got there. It was a grind though.”
Chester junior Matthew Chandler, who tied Creighton and Ashburn’s Sean Stuart for low round of the day (68), had five birdies through his first 12 holes to finish in third. His only blemish on the day was a bogey on 18.
Creighton entered the day with a four-stroke lead over Bruce Tomie of Northumberland Links and five up on Black.
The lead was quickly cut to three after Tomie birdied the par-5 first hole and Creighton managed par.
After pars through his first five holes, Creighton, who had his father Grant caddy for him, said it was time “to put the foot on the gas.”
“I wasn’t being very aggressive so I told my Dad after hole four, ‘alright I’m done with this, let’s start playing aggressive again,'” Creighton recalled.
“From there on it was good. I’m terrible at aiming away from pins. I can’t aim to the middle of the green. I hate it. When I’m playing aggressive is when I’m playing my best.”
Creighton will join Black and Ashburn’s David Williamson on the provincial team at the Canadian men’s amateur championship, Aug. 7-10 at the Toronto and Islington golf clubs in Mississauga, Ont. Chandler declined his spot on the team. 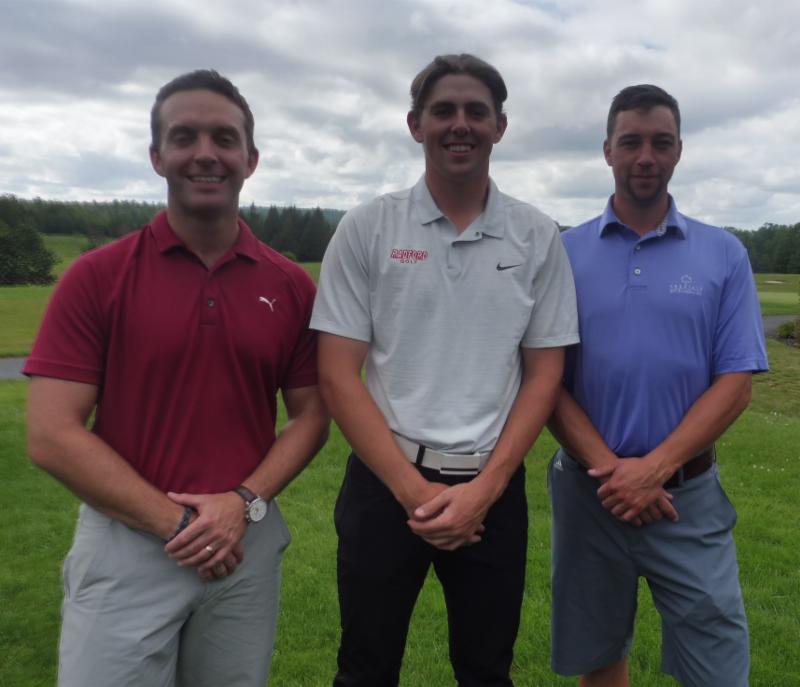 Williamson defeated Bruce Tomie Northumberland Links in a one-hole playoff for the third spot on the team. Tomie will be the alternate.
Creighton, who returns to Radford University in Virginia in late August for his senior season of college golf, said his status for the Cape Breton Open is up in the air.
“Pro golf is something I have given a thought to in the past year,” he acknowledged. “I’ll look into it because it would be good to match myself up against those guys. We’ll see if it works.”
For complete scoring, click here .