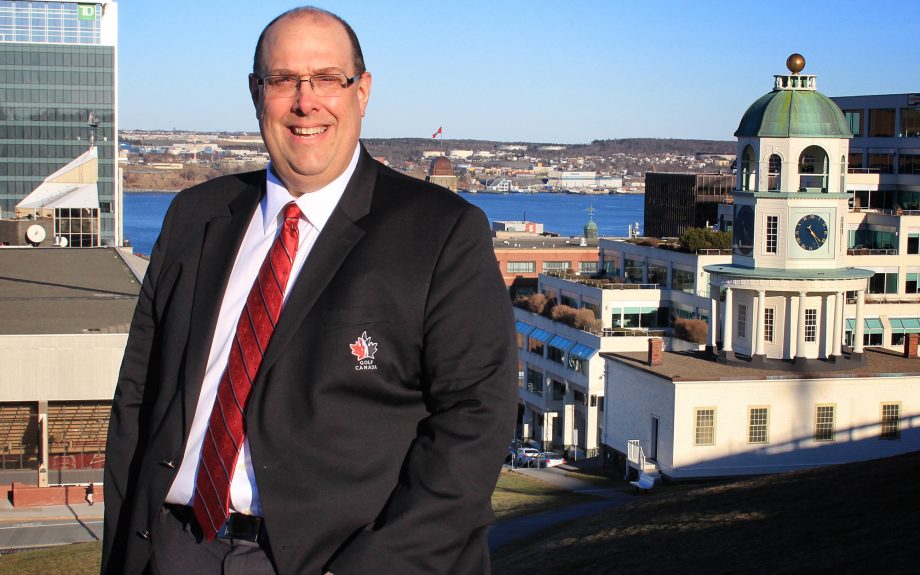 As the first two-term Golf Canada president since 1931, you might expect Roland Deveau to heave a huge sigh of relief as he hands the mantle to Calgary’s Leslie Dunning.

You would be wrong.

While Deveau, 56, looks forward to getting back to “real life,” as he puts it, he is justifiably proud of the 24 months he spent at the helm of the association. It was a span that encompassed a change of CEOs of the organization as well as experiencing the return of golf to the Olympics and Canada’s 150th anniversary celebration.

“It wasn’t all smooth sailing, but that’s an integral part of leadership in challenging times,” Deveau said in an interview with Golf Canada a couple of weeks before the association’s annual general meeting in Calgary where Dunning takes over. As past-president, he will remain on the Golf Canada board of directors.

“When I look back, and I want to emphasize that nothing gets accomplished without the support of my fellow directors, staff and volunteers, I think we met many objectives. We stabilized our finances, we delivered our entire suite of programs as promised, some of which are recognized world-wide as best in class. We’re well on our way to delivering our new membership model, which will be completed next year.”

Deveau’s term in office was also marked by memorable performances on-course. Canadian golfers, both amateur and professional, showed well around the world.

But for Deveau, the singularly “surreal” moment came as he watched young Canadian pro Austin Connelly at the Open Championship at Royal Birkdale in England.

“Being there on the tee at that last round, seeing Austin in the penultimate group with Brooks Koepke, who had won the U.S. Open just a month before, and teeing off just ahead of the final group of Matt Kuchar and Jordan Spieth, it was unbelievable. Surreal. That’s the only way I can describe the feeling.”

Connelly spent summers playing and practising at Deveau’s home course, Clare Golf and Country Club, a few hours from Halifax, where Deveau, a lawyer, is the vice-chair of the Nova Scotia Utility and Review Board.

“To see him grow up during the summers, living less than a mile from my parents’ house and to follow him in the final round of the Open Championship and see his name on the leaderboard … Absolutely incredible.”

He said that experience, for him, encapsulated what golf is all about: Seeing a promising youngster supported by the golf community rising to the world stage.

Most golfers don’t understand the role of Golf Canada’s president. Many may think of the office as a ceremonial one, a figurehead akin to our country’s governor-general. In Deveau’s case, nothing could be further from the truth.

There are unrelenting governance and organizational responsibilities and myriad demands on personal time that must be juggled with the “real job” of the president who is, in the final analysis, just the “first among equals” of Golf Canada’s many volunteers.

“It’s not all about handing out trophies,” says Deveau. “People wouldn’t believe how much goes on behind the scenes. We’re entrusted with the game in Canada as the National Sport Organization and we have never taken our role lightly.”

The gregarious Deveau was the first Golf Canada president to use social media to stay in touch with Canadians and kept his “feet on the ground” as a Rules of Golf official at some significant events, including the RBC Canadian Open and the Canadian Men’s Amateur Championship in 2016 and 2017, the 2017 Canadian Women’s Amateur and Canadian Junior Boys Championship, and others.

Deveau says it gave him a chance to interact with players and, most importantly, spectators.

“It showed me just how many people in Canada love this game so much. Not that I would say it gave me ‘credibility’ as such but it gave me a lot of insight.”

As he leaves his historic role, Deveau departs not just with hard-earned credibility and insight, but with other emotions. Regret is definitely not one of them.

“These past two years have definitely been a challenge, but they’ve been so very rewarding and worthwhile. I enjoyed every minute of the experience.”