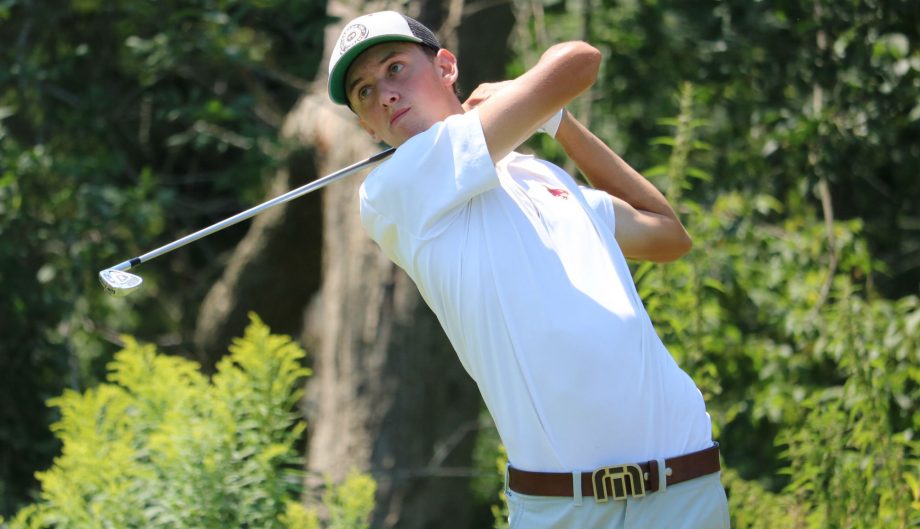 Calvin Ross carded an 8-under-par 62 setting a new amateur course record at Cataraqui Golf & Country Club during the third round of the Canadian Junior Boys Championship on Wednesday.

Ross went bogey free for the fourth time ever and registered six birdies and a clutch eagle on the par-5 fifth hole, moving him to 10 under on the tournament with a seven-stroke lead.

“I’m a little nervous right now,” he said, in front of the large crowd that gathered to see his final putt fall. “Which is weird because it’s all done now, but I’m happy. I’m really proud of myself and I hope I can keep it going tomorrow.”

The 18-year-old from Fredericton, N.B., was 7 under par as he launched his tee shot on the 18th hole behind the iconic tree sitting in the middle of the fairway at Cataraqui Golf and Country Club. Invisible to the gallery waiting greenside because of the obstacle, Ross grabbed his 8-iron and hooked it around the tree.

The ball landed less than three feet to the hole.

“It scared me for a little bit because it hung out over the trees for a long time, but when it went down is when it started to move the most,” he said. “While watching it I thought it was going to land on the hill just to the right and kick hard across the green. For it to carry was a little bit of luck.”

Playing next to Ross during the third round was Tristan Mandur from Mill Bay, B.C. The 18-year-old shot a 1-under-par 69 to move to 3 under for the tournament and sits alone in second place.

Christopher Vandette launched himself up the leaderboard and into contention after he shot a 6-under-par 64 – the lowest round of the tournament up to that point.

“I was getting it off the tee really well today,” he said. “I hit my irons really well and I was finally sinking some putts so it feels good. I knew that if I had a good round today then I would be right there with the leaders. Now I just have to do the same thing tomorrow.”

The 15-year-old from Beaconsfield, Que., started his day back at T37 at 5 over par before he registered the first 64 of the tournament and moved to 1 under par and into T3.

Both Vandette and Choi share the lead for the juvenile division while Kai Iguchi (Banff, Alta.) and Nolan Thoroughgood (Victoria, B.C.) sit two strokes back at 1 over par.