Spieth turns into a beauty on a nasty day at British Open, Austin Connelly T6 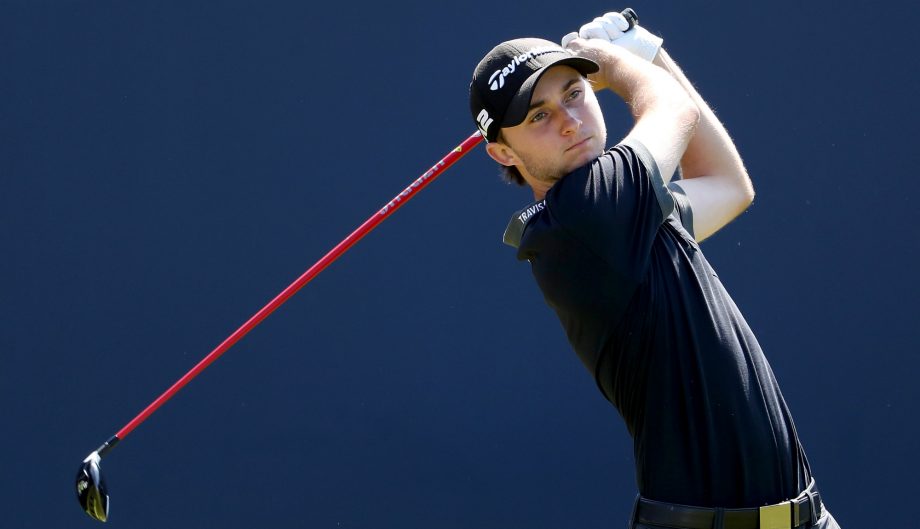 Jordan Spieth expected a rough time at the British Open before he even got to the golf course.

He spent Friday morning at his rented house in front of the television, watching players battle a relentless wind at Royal Birkdale, all the while checking a forecast that was even worse for when he played in the afternoon.

“It wasn’t a great feeling knowing we were coming into something harder than what we were watching,” he said.

Spieth did more than just survive.

With a short game as sharp as it has been all year, and a 3-wood that turned out a lot better than it looked and led to an eagle, Spieth seized control with a 1-under 69 that gave him a two-shot lead over Matt Kuchar going into the weekend.

“It was a really solid day.” @JordanSpieth, the clubhouse leader (-6) speaks to the media. #TheOpen pic.twitter.com/FIg8zxEo78

Spieth turned a bogey or worse into an unlikely par by chipping in from just short of the 10th green. And he learned enough from watching TV to know that going a little long on the par-5 15th would give him a better birdie chance than playing short. So he switched from a 3-iron to a 3-wood, hit it a little off the neck and watched it run hot and fast some 100 yards along the wet turf to about 18 feet away.

“I mishit the shot, which is probably why it looked so gross,” Spieth said. “I hit it low off the heel, which is easy to do when you’re trying to carve a cut. And it just … one hop, scooted around the group of bunkers there, and then it was obviously fortunate to get all the way to the green.”

The flight of that 3-wood looked as ugly as the weather. The outcome was as bright as his chances of getting his name on another major championship trophy.

Spieth was at 6-under 134. It was the 12th time he has been atop the leaderboard at a major, including the fourth rounds of the Masters and U.S. Open that he won in 2015. Spieth is the sole leader at a major for the first time since the third round of the Masters last year, when he was runner-up to Danny Willett.

“Anytime you’re in the last group on a weekend in a major … you get nervous. And I’ll be feeling it this weekend a bit,” he said. “But I enjoy it. As long as I approach it positively and recognize that this is what you want to feel because you’re in the position you want to be in, then the easier it is to hit solid shots and to create solid rounds.”

Austin Connelly, a dual Canadian-American citizen who was born in Irving, Texas, is five shots back after a 72. He’s in a tie for sixth at 1 under. Adam Hadwin of Abbotsford, B.C., struggled in his second round and missed the cut at 13 over.

“Today was very similar to @Jones_Cup weather. It’s usually a bit colder than that there.” – Austin Connelly, 2015 Jones Cup champ

Kuchar played in the morning in steadily strong wind, but without rain, and pieced together a solid round until a few mistakes at the end for a 71. He was at 4-under 136, and it would have been a good bet that he would be leading with the nasty weather that arrived.

“I think that’s what people enjoy about the British Open is watching the hard wind, the rain, the guys just trying to survive out there,” Kuchar said. “Today is my day. I get to kick back in the afternoon and watch the guys just try to survive.”

He wound up watching another short-game clinic from Spieth.

The key to his round came in the middle, starting with a 10-foot par putt on No. 8 after he drove into a pot bunker. The biggest break came at No. 10, when the rain was pounding Royal Birkdale. Spieth hit into another pot bunker off the tee, could only advance it out sideways, and came up short of the green in light rough.

“Massive,” he said about the chip-in par. “Nothing said ‘4’ about this hole. I feel a little guilty about taking 4 on the card.”

And he wasn’t through just yet. Spieth rolled in a 35-foot birdie putt across the 11th green, and then after watching Henrik Stenson’s tee shot on the par-3 12th land softly, Spieth realized he could take on the flag. He hit 7-iron to 2 feet for another birdie, and followed that with a beautiful pitch to tap-in range for par on the 13th.

Even so, his work is far from over.

The chasing pack features U.S. Open champion Brooks Koepka, who failed to make a birdie but stayed in the hunt with 16 pars in a 72, and Ian Poulter with his newfound confidence, which is growing even higher with the support of the English crowd. Poulter shot 70.

Not to be overlooked was Rory McIlroy, who recovered from a horrific start Thursday to salvage a 71, and then kept right on rolling. McIlroy, who was 5 over through the opening six holes of the tournament, ran off three birdies with full control of every shot on the front nine.

And much like Spieth, he kept his round together with crucial par saves early on the back nine when the wind was at its worse. McIlroy posted a 68 and was at 1-under 139, only five shots behind with only five players in front of him.

“To be in after two days and be under par for this championship after the way I started, I’m ecstatic with that,” McIlroy said.

Not everyone got off so easy.

Justin Thomas, who started the second round just two shots behind, drove into the gorse on the first hole and took double bogey. That wasn’t nearly as bad as the sixth hole, where he tried three times to hammer out of the thick native grass well right of the fairway. He couldn’t find the ball after the third one, and he wound up taking a quintuple-bogey 9. Thomas made another double bogey on the 13th hole and shot 80.

Spieth never looked as if he was under any stress, except for his tee shot into the bunker on No. 8. A British writer suggested a lip-reader could have detected some choice words coming out of his mouth. Spieth smiled and replied, “I speak American. You probably didn’t understand me.”

The language of his clubs – especially the wedge and the putter – was all too familiar.