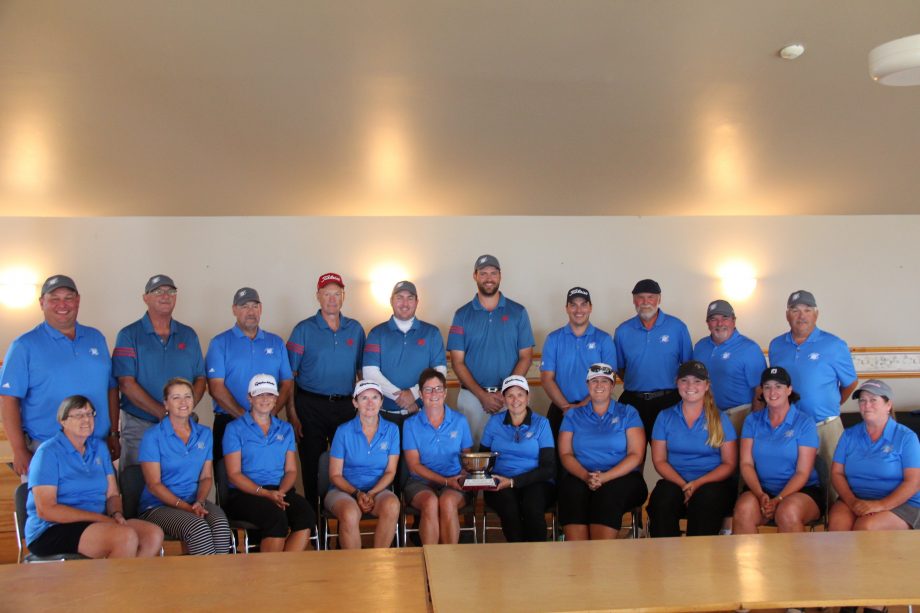 The final day of the 2017 Atlantic Golf Championship would provide a new challenge as mild rain, cool temperatures and changing winds would provide an additional test to the 52 competitors, over and above the par 72, Cornish & Robinson designed, Covered Bridge Golf & Country Club in Hartland, NB.

Originally contested in 2014, 2017 marks the fourth installment of the Atlantic Golf Championships where teams from New Brunswick, Prince Edward Island, Nova Scotia and Newfoundland & Labrador compete for both the “Atlantic Cup”, and individual exemptions over eight (8) separate division and four age categories, into the 2018 Canadian Championships.

In the Amateur Men’s division it was New Brunswick’s Michel Landry of the Fredericton Golf Club overcoming a two stroke deficit to PEI’s Jeff Hughes, of the Belvedere Golf & Country Club, to claim NB’s 2nd amateur men’s title, and first since The Riverside Country Club’s Edward Reevey did so in the inaugural event at the Bell Bay Golf Club, in Bedeck, NS, in 2014.  Despite making bogey on the par four 2nd, Landry would still cut the deficit to one as Hughes would double the tricky 384 yard par four.  A par at the third combined with a Hughes bogey would get Landry back to even for a short time.  Hughes would birdie the 4th to go one up again but Landry would rattle off three consecutive birdies at the 5th, 6th and 7th , that combined with Hughes’ double at seven would push the two time NB Men’s Amateur Champion four clear through 43 holes.  A double bogey at the 8th would see Landry make the turn in an even par (E), 36, and two shots up on Hughes who would card a four over par (+4), 40, on the outward nine.

With Hughes needing to come and get him, Landry would settle in posting nine consecutive pars on the back nine to win the division by three shots over Hughes, whose two bogeys and a birdie at #18, would see him close the day with a five over par (+5), 77, and a three day total of 226.

Nova Scotia’s Cristal Fitzpatrick (79, 75, 79, +17, 233), of the Eaglequest Grandview Golf & Country Club would join fellow divisional champions to go wire to wire claiming the Ladies Amateur division.  With a ten shot lead entering Saturday’s final round, Fitzpatrick would cruise home posting a birdie, 11 pars, four bogeys and two others on the day to card a final round seven over par (+7), 79 on the day.  Maintaining her grip on second in the division was Team NB’s Jescynda Hotham.  Hotham (84, 80, 78, +6, 242), of the Country Meadows Golf Club, would fire her round of the tournament carding four bogeys and one other to close the event with a six over par (+6), 78, and make up one shot on Fitzpatrick.  Rounding out the top three was Team NB’s Maureen O’Donnell of the Fredericton Golf Club (84, 81, 92, +20, 257).

The battle of the day may have been for the Men’s Mid-Master title, as New Brunswick’s Stuart Musgrave, PEI’s Tim Yorke and Team NB’s Chris Bunting all started the day within two shots of each other.  While he started the day with a one shot advantage over Yorke, and a two shot lead over Bunting, Musgrave would struggle on his opening nine holes carding a five over par (+5), 41, that consisted of three bogeys and a double at the par three 7th.Yorke would bogey the par five 1st, the par three 4th  and the par three 7th before making birdie at the 9th to post a two over par (+2), 38, to move two clear of Musgrave, but the big mover of the day was Bunting.  Birdies at the 1st, 4th and 8th would wipe out his lone bogey on the front, at the par four 2nd, to see him card a two under par (-2), 34, on the front and jump into the lead three up on Yorke and five clear of Musgrave.

While Yorke and Musgrave would both right the ship on the back nine, posting one under par (-1), 35’s, for final round 73’s and 76s respectively the division was now Bunting’s to lose.  A birdie at the 11th would extend his lead to four shots over Yorke, bogeys at the 12th and 15th would bring him back to the pack.  Bunting would fall no further as he would par the difficult par four 16th, the par three 17th and the challenging par five 18th to tie the low round of the event and post a one under par (-1), 71, on the day, a three day total of 219 and a one shot victory over Yorke.

New Brunswick’s Paula Napke-Flanagan (79, 77, 79, +19, 235) would go wire to wire to win the Senior Women’s division.  Starting the day with a five shot lead over PEI’s Sherry White, Napke-Flanagan would double her lead on the front nine thanks to a three over par (+3), 39, compared to White’s eight over par (+8), 44 on the outward nine.  Despite bogeying her first three holes, Napke-Flanagan would settle in to record six consecutive pars to close out her front side.  Four more bogeys on the back nine, at #11, #13, #16 and #17, would see Napke-Flanagan cruise into the clubhouse with a respectable seven over par (+7), 79, and a ten shot victory over Stanhope, PEI’s Chrissie MacLaughlan (81, 83, 83, +29, 245) who’s consistent play throughout the week would earn her solo second.  Jumping into third position, with the categories round of the day, was NB’s Pam Cossey (85, 83, 78, +30, 246), of the Rockwood Park Golf Course.  Cossey’s final round six over par (+6), 78, would jump her into third position, four shots clear of Stratford PEI’s Sherry White (Belvedere Golf & Country Club) and the Country Meadows Golf Club’s Sandy Comeau who finished tied for fourth.

The Fredericton Golf Club’s Penny Dickeson (95, 87, 84, +50, 266), would claim the ladies Super-Senior division by 15 shots over Lorrain MacDonald (99, 92, 90, +65, 281) of Kensington, PEI and the Red Sands Golf Club.  Dickeson would steadily improve her play throughout the week, improving by eight shots from round one to round two and by another three shots from round two to three, to claim the division win.

In the race for the Atlantic Cup, New Brunswick’s victories in all six divisions would see Team NB earn the full 24 points and supplant two time defending Atlantic Cup Champions Team PEI (17 points) to bring home the Atlantic Cup for the first time.  In third position was Team NS with 9 points while Team NL rounded out the contest by claiming the final 2 points available.

For more information on the Atlantic Golf Championships – Click here

For more information on the Golf Newfoundland Labrador – Click Here

For more information on the Golf New Brunswick– Click Here