Tom Zariski selected as Golf Canada’s Volunteer of the Year 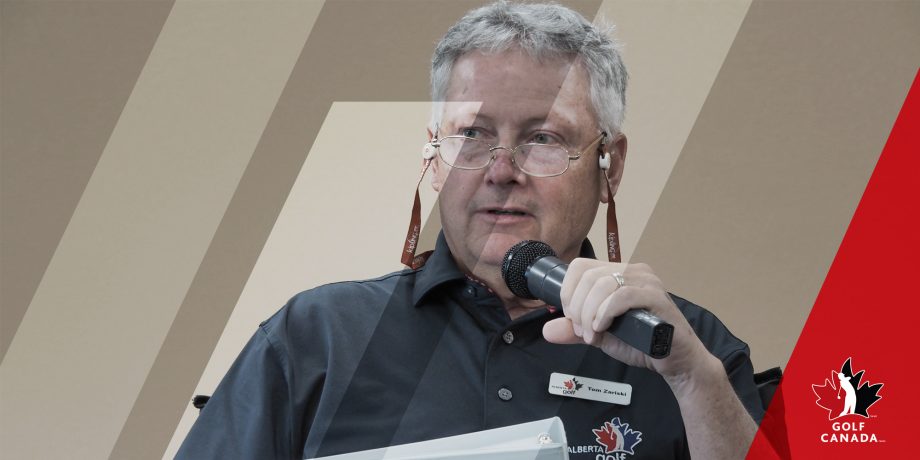 Golf Canada is pleased to announce that Tom Zariski of Drumheller, Alta. has been named the recipient of Golf Canada’s 2017 Volunteer of the Year Award.

A Level 4 Rules of Golf Official and past President of Alberta Golf, Zariski will be acknowledged during the closing dinner of Golf Canada’s 2018 Annual Meeting on Saturday, January 27th at the Grey Eagle Resort and Casino in Calgary.

“Volunteers are the driving force behind the success of golf in this country and we are proud to recognize Tom Zariski for his leadership and extensive contributions to support the game of golf in his home province of Alberta,” said Golf Canada President Roland Deveau. “Tom has given back to the game at the provincial and national level and it is fitting that his leadership, commitment and contributions are being recognized.”

Each year in Canada, tens of thousands of committed volunteers help to support the game of golf in communities from coast to coast.

Now in its 12th year, candidates for Golf Canada’s Volunteer of the Year Award are put forth for consideration by the respective provincial golf associations in acknowledgment of significant contributions to the game of golf in their community.

Reading through Tom Zariski’s bio on the Alberta Golf website provides a glimpse of the credentials and contributions that brought the Drumheller, Alta. native to serve as (past) President of the provincial golf association.

His commitment to support Alberta Golf and grow the game across the province is outstanding, and it is that commitment and leadership that validates his selection as Golf Canada’s 2017 Volunteer of the Year.

The credentials speak for themselves—a Level 4 Rules of Golf Official for the past 10 years who was elected to Alberta Golf’s Board of Directors in 2010.

As one of Alberta’s top Level 4 Rules Officials, he plays a leading role in conducting most provincial golf championships and works to foster a strong dialogue amongst Rules Officials across the province.

At the Board and committee level, he is forthright in sharing his opinions and expertise with a commitment to strong governance protocol and a concerted effort to run efficient and effective meetings.

A proponent of golf and giving, Zariski also sits as President of the Alberta Golf Association Foundation Board which awards over $50,000 in scholarships annually.

He is also a member of Golf Canada’s Rules Committee and the founder of the provincial Volunteer Engagement Committee—which has since seen its work for volunteers embedded into Alberta Golf’s annual business plan.

As an administrator, Zariski believes in a big picture approach to Alberta Golf’s working relationship with Golf Canada, and has been a driving force behind the provincial implementation of the joint membership model.

He was named the Town of Drumheller “Citizen of the Year” in 2005 and when he is not golfing or volunteering, he has come to enjoy the game of pickle-ball.

Congratulations to Tom Zariski of Drumheller, Alta., on being named Golf Canada’s 2017 Volunteer of the Year!