Garry Beattie, diagnosed with a brain tumour that forced doctors to perform emergency surgery and left him in an induced coma for eight days, is using golf and a dry sense of humour to help him cope with the health crisis.
Feb 4, 2017 5:33 PM by: Stephen Forest
Publish with the expressed permission of Localxpress 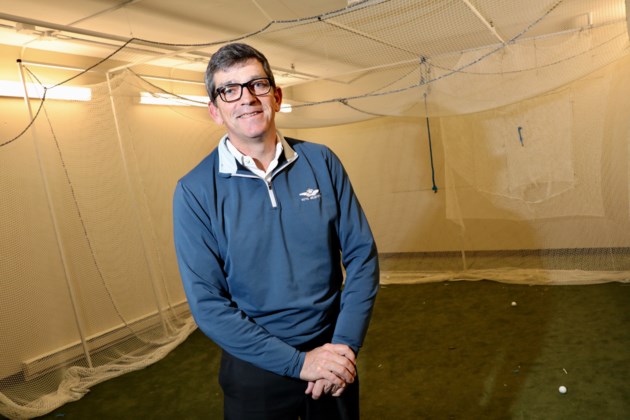 Looking back, Garry Beattie is glad he doesn’t remember.

He’s glad he doesn’t remember anything that led up to him being in the hospital, diagnosed with a brain tumour that forced doctors to perform emergency surgery and left him in an induced coma for eight days.

“I woke up with no memory of it, which obviously was a great thing,” he says, relaxing on a sunlit chair in his Bedford home, Clyde the pug on his lap.

“I didn’t go through it, but my family did.”

It happened almost two years ago, as he and his wife, Lori Duggan, were returning from a trip to the Masters with friends.

The last thing Beattie remembers is that they had enjoyed a beer at the Atlanta airport and he was paying the bill.

Piecing together details from what he has been told, he knows he began to have vision problems the night after getting home.

He went out the next day to pick up glasses he had ordered before the trip. When he got home that night, he was told he had been in a car accident and side-swiped another vehicle. He figures the vision in his right eye was gone by that time but he did not know it.

He thought he was fine.

He and his wife decided it was best to go to the emergency department to see what was wrong. Looking back, it might have been a stroke, he says.

It was worse. A brain tumour. Glioblastoma.

“It’s the gift that keeps on giving. It’s recurring glioblastoma.

“But ultimately the fact I even survived was more than a one-in-a-million chance.”

He says he was counted out three times during the eight days in a coma, when doctors told his wife he would not make it.

‘“So they tell,” he says with a deadpan delivery his friends know so well. “This could all be a sham, I don’t know, but I’m trusting people.” 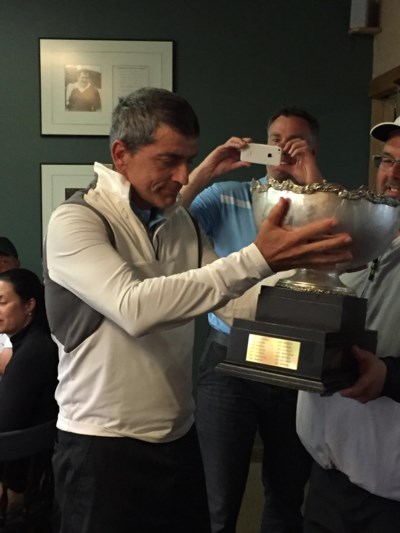 Beattie was born in Montreal but grew up in Woodstock, N.B.

He began playing golf on the nine-hole course in town at age 12 and was pretty good, too. He still has the faded newspaper clipping that reports he made a hole-in-one on his way to winning a junior tournament. He’s quick to note the old-school visor and short shorts that were the style back in the day.

After high school he ventured to Wolfville and Acadia University, where he studied business. From there, it was selling computers, but that wasn’t what he wanted to do forever.

So, he packed up and decided to travel in Asia for four months.

“When I got back, I did what any kid would want to do when he gets back from a trip around the world — I got my accounting degree,” he says, knowing the person he’s speaking with will get the joke.

That led to a job at a major accounting firm, where after about 15 months he and his boss agreed to disagree on his value to the firm.

Beattie has never shied away from change, so it was simply time to again do something new.

He decided to start his own business. He founded business software consulting company HBM Integrated, later to merge with BAASS Business Solutions.

Though he never gave up the game, from the time he was a junior until around the age of 40, it was just a pastime.

But with the company running successfully, he wanted to really improve his game and immersed himself in instruction.

It was 2006 when he got to measure his work against some of the best players in the province at the provincial mid-amateur championship, which at that time was for players 40 and older.

In his first competitive tournament since his teenage years growing up in Woodstock, Beattie made the provincial mid-amateur team. He eagled the second hole of a playoff to earn a trip to the national championship.

Considering the fight he’s waging now, it’s easy to see why golf is his game.

“There’s a real sense of control, that you have complete control over, not the ball, but how you react to the ball,” he explains. “How you handle the challenges, frustrations — that’s what I’ve been reminded of over the past couple of years.”

Golf is part of his recovery, both physical and mental.

“I’ve learned to not expect perfection because it never happens. Whatever I can control, that’s what I want to take responsibility for. . .”

The tumour has forced Beattie to reinvent his game, too.

The vision in his right eye is gone for good and he is weaker on his left side.

The swing that made him one of the province’s most consistent players no longer produces a baby fade. Now it’s a slight draw.

“The good news is that of all the challenges I have, putting is still one of them.”

He walks the course every round, though he has given up carrying his clubs.

He can no longer drive, so Duggan gets him around for business. They’ve been married since 1997 and celebrate their 20th anniversary this year.

But when it’s time to play golf, his pals line up to offer him a drive.

He’s always been one of the more popular players at Ashburn Golf Club, bringing that dry sense of humour to the course. Playing partners need to be on their toes to keep up with his quick wit.

His memory has been affected by the tumour and his attention span is not where he would want it, which challenges his ability to keep his focus late into the round.

“At the end of the day when I’m golfing, I’ll make more egregious mistakes than I would in the past,” he says.

His handicap has gone from two to five, not that anyone cares. His golf friends are thrilled beyond words that he is playing at all.

“I think Garry is one of the most courageous and determined guys I know,” says past provincial champion and clubmate Trevor Chow. “Not only did he return to the golf course so quickly but he played at a high level and did it in competition. He’s an inspiration to us all.”

“The fact some people see what I’m doing is inspirational, I don’t really get it,” Beattie says. “It seemed like the only thing for me to do is carry on.”

A little over two months after his surgery, Beattie represented Ashburn against Brightwood in the Rose Bowl, a Ryder Cup-style team event. Beattie had earned his spot the year before and there was doubt whether he would be able to take part.

In alternate shot play, he and partner James Laing took their match to the 18th hole and in singles action, he birdied two of the final three holes to again take a match to the final hole.

“I don’t remember a lot. I do remember that I wasn’t an anchor,” he says with a laugh.

Ashburn edged Brightwood to retain the Rose Bowl and a simple tradition of the matches took on a greater significance that day.

When Brightwood filled the Rose Bowl with beer for the victors to enjoy, Ashburn captain John Keefe called on Beattie to take the first swig. Keefe’s brief, heartfelt speech brought both teams to their feet and put a lump in the throats of a lot of the players.

“It was nice to be somewhat separated, but the best part of it is being part of the team and I suspect it wouldn’t have been beyond what had happened if we hadn’t won that I might have gotten the first sip anyway, because that’s the kind of thing the organization at Brightwood does … because everyone knows and had heard that this is what I was doing two months after brain surgery.”

There was no victory, but Beattie struck a shot that will be talked about for years to come when Rose Bowl stories are told.

One down on the 18th hole of alternate shot play, Beattie knocked an 8-iron to two feet for a birdie to halve the match.

There’s been success at home, too. He reached the finals of two match play events at Ashburn last season.

“I know that there’s any number of people who have me as their touchstone to remind themselves of what they should be doing and maybe why they shouldn’t complain that much about the game,” Beattie says.

Off the course, he continues to serve with the Nova Scotia Golf Association. Last year he was installed as the association’s president and he’s looking forward to visiting clubs around the province to hear the issues that are important to them. 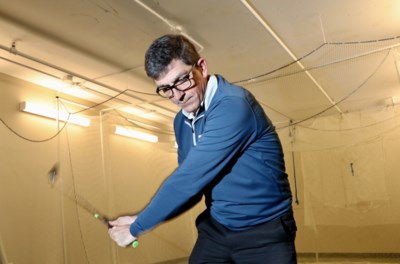 “The nature of the glioblastoma is that it is aggressive,” Beattie explains. “As my surgeon said, I have a very angry tumour.”

According to Webmd.com, glioblastomas grow quickly and cause pressure on the brain, which brings on the first symptoms. They can include persistent headaches, seizures, vomiting, difficulty thinking, mood swings, double or blurred vision and difficulty speaking.

Ever the optimist, Beattie is thankful he ended up in hospital in Halifax rather than in the United States, but not for the reason one might think.

“The fact is, Halifax has some of the best brain surgeons in the world,” he says, later mentioning his neurosurgeon, Dr. Adrienne Weeks. “A great place to go for a brain surgery is in Halifax.”

Since his surgery nearly two years ago and the chemotherapy that followed, he’s had regular MRIs to keep a close watch on the tumour.

“Going into this, there was no question in my surgeon’s mind this was coming back, so it’s not like, ‘We’ll keep our fingers crossed,’” he says. “It will come back because that is the nature of recurring glioblastoma.”

Early last month, doctors detected a change in the tumour.

Another surgery to get at the tumour again is scheduled for Thursday.

Beattie is relieved this is a planned operation and not one that required immediate attention. He’s signed up to be part of a new drug therapy, too.

“Ultimately I want to be a good patient,” he says. “At the end of the day, the next person is going to have a better chance than I had.”

So he’s heading into this major surgery with trust in his surgeon and good thoughts.

“There’s an option to decide which direction you’re going to go and I’m going to be 90 per cent optimistic even though I’m going into somewhat experimental mode with this next one,” he says. “That’s my approach.

“I do know that having everybody tell me — virtually 100 per cent of people tell me — attitude is definitely a factor in survival and success, I’m fully believing in that.”

He’s hopeful his treatment will allow him to continue doing what he did after his first surgery, which included playing golf.

Post-surgery plans have already been made. Beattie hopes to be gently swinging a club in his indoor golf simulator in a week.

“If the doctors can get ahead of this, I’ll plan to play in my first seniors event next year,” he says, jumping ahead to when he’ll be 55 years old. “That’s what I’ll be looking forward to and being the young guy again.”

Beattie has never been afraid of change. If that’s what is required after this operation, bring it on.

“I can say this is an advantage. I can probably spin anything in a positive manner when it comes to golf and ultimately to everything I do.

“I’d rather not change to darts or something that isn’t golf, so hopefully that isn’t necessary.”